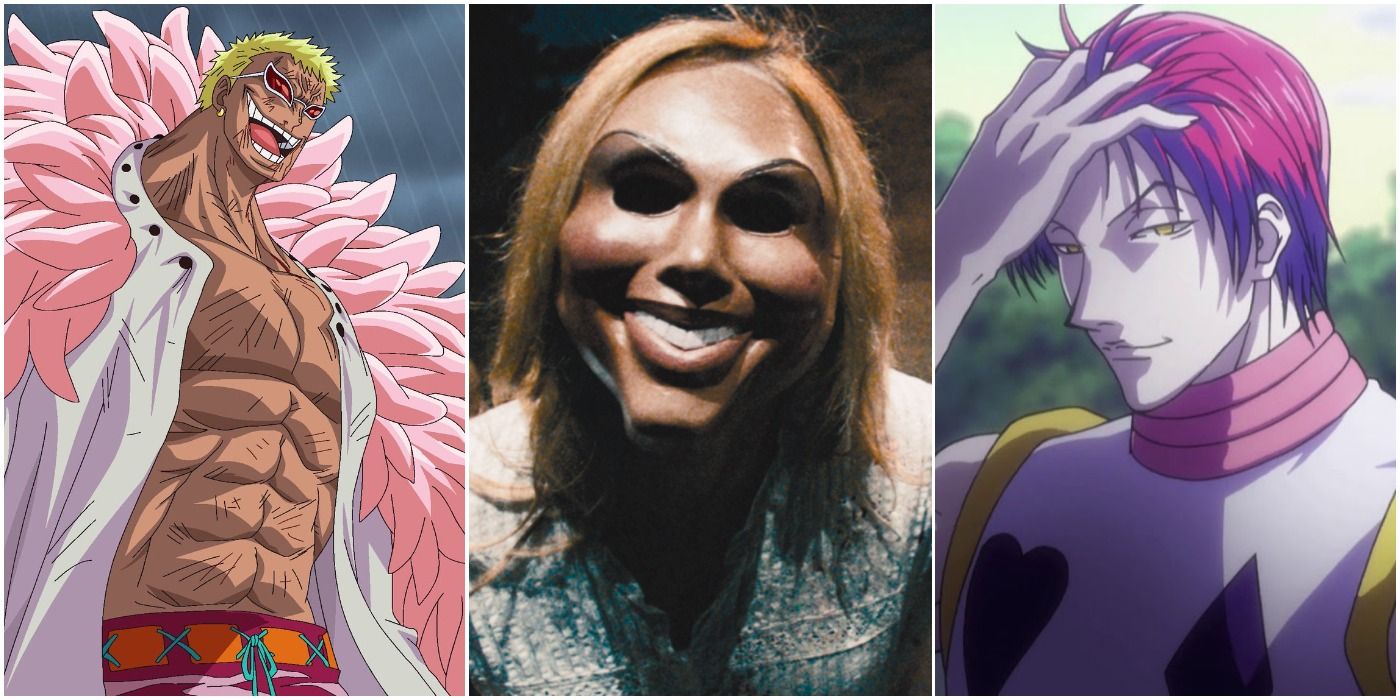 The Purge is an annual event in the fictional universe based on the real world where any crime becomes legal for a single evening. It was intended to allow civilians to relieve their stress and grievances, in the hope that crime would be reduced for the rest of the year.

RELATED: 10 Anime Heroes Who Would Be Terrifying In Real Life

While this predictably resulted in a national catastrophe, many anime characters would appreciate the carnage and bloodshed that the purge could bring.

Mad Pierrot was a man who had been shattered by the application of extensive scientific experiments. Since the villain’s escape, his only goal was to eradicate those who were unfortunate enough to cross his path. His increased physiology allowed him to face Spike Spiegel despite the hero’s vastly superior combat skills.

In an environment like the Purge, he could finally go after his victims in broad daylight without worrying about retaliation from the authorities.

9 Doflamingo turned his own country into a lawless battleground, much like The Purge (One Piece)

Doflamingo was responsible for the usurpation and management of Dressrosa. After Usopp successfully defeated Sugar’s Devil Fruit and returned the transformed toy slaves to their original forms, he trapped the nation’s inhabitants in a huge birdcage and announced the country’s descent into the anarchy.

In order to cause as much unrest as possible, he even used his strings to forcibly pit civilians against each other. Given his affinity for chaos and his desire to destroy the world, he would thrive in circumstances like the Purge.

Sergeant Gross was a Marleyan officer fascinated by death. This was why he liked to turn the Eldians into pure titans and have them eat each other, rather than just immediately executing them.

Given Gross’s macabre disposition, he would love to watch the purge from the safety of a bunker. As long as external dangers did not threaten him, he would find the spectacle to be a meaningful way to keep death in mind without letting it come too close for his liking.

Hisoka was obsessed with questioning himself and tormenting others. He infiltrated the ghost troop only to struggle to find and confront his leader, Chrollo.

If global laws were suspended, he would take the opportunity by identifying powerful targets and attacking them without their consent. Even if no one was able to challenge his strength, he may be inclined to kill a few innocent people in order to quench his thirst for blood and his sense of depravity.

Although Orochimaru is a nemesis of the Leaf, he did not attack him out of a desire for revenge or even out of self-preservation. Instead, he was captivated by the winds of change and used chaos as a vehicle to achieve these goals.

Nothing thrilled him more than the carnage the Sound and Sand villages unleashed on the Leaf during their invasion. Likewise, he would thrive in an environment like the Purge, using it to experiment with his latest jutsu and acquire test subjects for future endeavors.

When the Millennium Organization was created, the Major had one goal in mind: to avenge the Third Reich and cause as many deaths as possible. He has spent decades mustering and strengthening his forces for these purposes and even synergized his attack with that of the Iscariot organization.

He showed no sense of self-preservation when confronted with Integra Hellsing, citing that the lives he had already taken were enough consolation for his own death. In a situation like the Purge where national governments would not resist him, the Major would be unstoppable.

Shigaraki was the leader of the League of Villains and a young man who hated the Society of Heroes. He caused as much wanton violence as he could reasonably get away with, relying on Kurogiri’s Warp Gate to quickly escape.

RELATED: My Hero Academia: 5 Villains Who Could Defeat Shkigaraki (& 5 He Would Destroy)

In a Purge situation, he would attack as many innocent civilians as possible in order to prove that the heroes couldn’t protect them. Once the dust settled, Japan could never look with confidence to the pros they had trusted again.

Nui Harime showed great pleasure in making other people’s lives as appalling as possible. Moments after meeting Ryuko for the first time, she told Ryuko how much she loved killing her father.

She was also interested in tormenting Lady Satsuki after her betrayal of Ragyo. In a Purge situation, she would likely attempt to slowly eliminate a random person’s family members, giddily savoring their desperate reactions and inability to stop her.

2 As the devil himself, Ryo sought to maximize suffering and lawlessness

Ryo was also known as Satan in the Devilman crybaby the universe and a villain responsible for the destruction of the world. Instead of immediately flattening him with his tremendous strength, he allowed a pernicious decline in order to savor the anguished reactions of the humans he intended to kill.

By the time his identity was discovered, it was too late to stop him. Akira was dead and the Earth itself was irrevocably cracked. Ryo wouldn’t realize the consequences of his Purge until it was already over and too late to reverse it.

1 Esdeath would use the purge as an opportunity to eliminate the weak (Akame Ga Kill!)

General Esdeath abhorred weakness and took specific note to eradicate it wherever it was found. She slaughtered those who resisted the Empire by the hundreds and even continued to fight after her leader was defeated because of how she reveled in combat.

The Purge would allow her to impose her Darwinist philosophy on a defenseless population, creating huge columns of ice and even freezing time itself to slaughter as many as she could. Only Tatsumi would be able to minimize the losses by distracting her with her affection.

NEXT: Akame Ga Kill: 5 Anime Characters Esdeath Could Defeat (& 5 She Would Lose)


following
Jujutsu Kaisen: every main character, ranked from weakest to strongest (so far)

10 anime characters Deku would be friends with