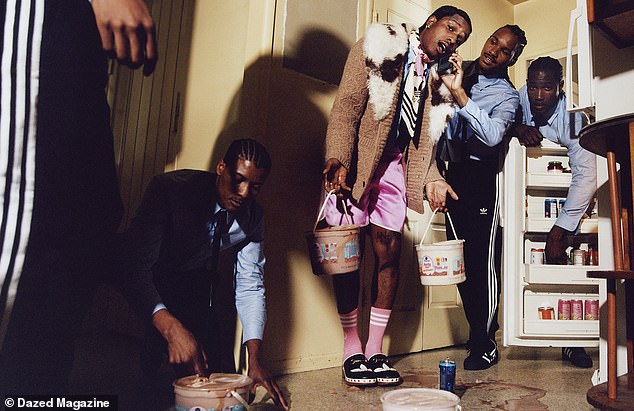 A$AP Rocky dipped into the past as he reflected on his early romance with Rihanna for his cover story in Dazed magazine’s Summer 2022 issue.

The 33-year-old rapper recalled how his 34-year-old love – who welcomed their first child together earlier this month – first grew close to him when she starred in his 2013 music video for his single Fashion Killa.

Looking back, he said it seemed like “the stars were aligned” when the two performers entered each other’s orbit.

Looking back on love: A$AP Rocky, 33, delved into his early relationship with love Rihanna, 34, in a new interview for the cover of Dazed magazine’s Summer 2022 issue, published Monday

Rocky (born Rakim Mayers) co-directed the Fashion Killa video with his late friend Virgil Abloh, and Rihanna starred in the video with him.

The rapper had already developed a friendship with Rihanna (née Robyn Fenty) when he was on his first tour.

“I was just on tour with my lady, you know? We wanted it to feel like a love story, a fairy tale with a street twist,” he explained of the music video. “I expected my next core to be receptive, but with Virgil in the mix, his success was a given.”

He told how he and Rihanna strolled “arm in arm” down the street in Manhattan’s Soho neighborhood – where the Work singer had just bought a penthouse – in looks designed by Abloh.

The rapper also opened up about raising a child with Rihanna, though he didn’t directly address their new son, who they welcomed earlier this month.

Rocky opened up about how Rihanna performed in her 2013 Fashion Killa video, co-directed by the late Virgil Abloh. “I was just on tour with my lady, you know? We wanted it to feel like a love story, a fairy tale with a street twist,’ he said.

Getting closer: He told how they strolled “arm in arm” down the street in Manhattan’s Soho neighborhood – where she bought a penthouse – in looks designed by Abloh

“I will always remind my kids to never lose their imaginations, even as adults, no matter what,” Rocky said, revealing that he’s a fan of childhood staples like the cartoon.

He added that he hoped to “raise open-minded children” and “not people who discriminate”.

“And I’m not trying to describe a saint, but realistically I just want a cool kid with cool parents,” he clarified.

Although rumors swirled for years that the two were dating after the collaboration, it wasn’t until December 2019 that the two seemed to get particularly cozy when they posed together on the British Fashion Awards red carpet.

As of January 2020, the two were dating, and while they declined to comment on the relationship for the year, they capped it off by spending Christmas together in his home country of Barbados, where he is also from. Rocky’s father.

Sweet: He added he hopes to ‘raise open-minded kids’ and ‘not people who discriminate’ after welcoming a baby boy with Rihanna earlier this month

Made public: The two are said to be dating from January 2020, and they made their red carpet debut as a couple in September at the Met Gala 2021

Their red carpet debut was at the 2021 Met Gala, which the hitmaker also discussed with the magazine.

Although the two arrived together in chunky ensembles, Rocky revealed that Rihanna rarely tries to match their outfits.

The puffy comforter he arrived wrapped in turned out to be a chance find that was not originally intended for his outfit.

“I went to Eli – Eli Russell Linnetz, he owns the ERL label – and when I walked in there was this duvet just sitting on the sofa. I was like, “Can I have this quilt?” And he was like, “Well, actually, I just saved it.” He had picked out a few looks for me, but I was on his a** about this quilt. And so he sewed it up and made it a custom piece. That’s how I decided to wear a quilt to the Met Gala,’ he continued.

A perfect pair: Rocky noted how the two seem to complement each other. ‘I think it’s just natural. We just happen to look good together naturally,’ he said

Rocky attributed how the two often seem to complement each other to their similar tastes and fashionable looks.

‘I think it’s just natural. We just happen to look good together naturally,’ he said. “You know, it would take a lot of work to match us forcefully before we leave the house. Sometimes we match a T, or we just wear the same clothes.

“If I buy a shirt she likes, I expect it to be stolen…but I have to give it back to her.”

He also reflected on his trips to Barbados with Rihanna, which he called “surreal”.

Mix and match: ‘If I buy a shirt she likes, I expect it to be stolen… but then I have to steal it,’ he joked

“It was honestly so amazing. I had family there who only came [to New York] once every five years, a family I’ve only talked to on the phone my whole life,” he explained. “Remember those one dollar, five dollar phone cards? I was raised to know my heritage, but I missed the real experience.

Elsewhere in the interview, Rocky opened up about an incident in 2019 where he “slashed” his face, which resulted in a thin scar starting from the corner of his mouth down his cheek.

“I was riding a Razor scooter, did a pop-up wheelie and just ate shit and just got a big gash on my face,” he previously said. QG. “I had to have plastic surgery and here we are.”

After the incident, Rocky began wearing scarves tied over his head, both to cover up the injury and as a style item.

But over time, the rapper has come to embrace the scar, even though he still wears his scarves from time to time.

Elsewhere, Rocky talked about wearing scarves to cover up a scar on his face. “I think scars are like war wounds, they just remind you of where you came from and what you have to show for it,” he said.

“I think scars are like war wounds, they just remind you of where you came from and what you have to show for it,” he told Dazed. “The average person doesn’t have one type of look. There are plus size models, people who now wear heavy modeling lingerie. My lady hires them all the time.

“We all have scars or blemishes. I think sometimes your scars bring you back to reality. Kiss him. Make it work for you,” he added.

A$AP wore a variety of streetwear looks for the interview of Gucci’s Adidas collaboration, Exquisite Gucci.

The Painted Word: A world of creative surprises awaits you at “Art House”.