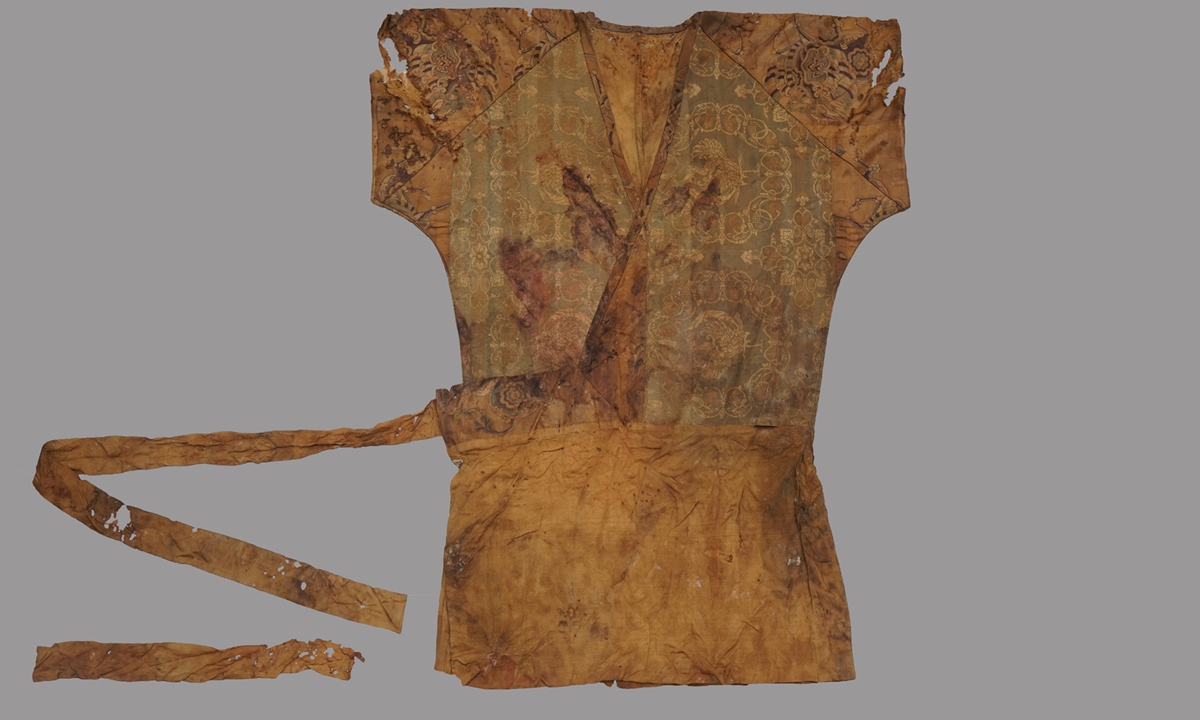 Tombstones and clothes (top) discovered in the burial complex of the Tuyuhun royal families Photos: Courtesy of the National Cultural Heritage Administration of China

Tombstones and clothes (top) discovered in the burial complex of the Tuyuhun royal families Photos: Courtesy of the National Cultural Heritage Administration of China

Zhang Wei was the first member of the archaeological team to enter the burial hall, and he was pleasantly surprised.

On the bed of the coffin was a huge black-brown iron object that turned out to be the first complete set of Tang dynasty (618-907) iron armor ever found in China.

Zhang, 39, from the Gansu Provincial Institute of Cultural Relics and Archeology, has been researching the Tuyuhun royal families’ burial complex since 2019, and it was during that first year that he found the armour.

Located in the city of Wuwei in northwestern China’s Gansu province, the complex was included in the list of top 10 Chinese archaeological discoveries of 2021, announced in late March. The rare armor was among several finds that make the site so valuable to researchers.

However, the discovery was only the first step in a long process that has not yet been completed. At the end of March, the work of restoring and preserving this ancient object entered its final phase, with in particular the delicate work of desalination.

It’s been a long road and started with the question of how to remove the find from the tomb without damaging it. The armor, which was next to the coffin, was badly rusted but overall well preserved. Getting it out in one piece would be tricky work.

After some discussion, the team finally decided to insert a large, thin plank of wood under the armor and craft it carefully.

The complete set of iron armor consists of more than 2,000 individual plates of various sizes and layouts, and each piece had to be analyzed and treated individually.

The restoration process was complicated by the way the plates are strung together and the different textures and colors of the rope material in different sections, Zhang noted.

With no contemporary relics to compare, the restoration team could only figure out how to put these fallen plates back on the armor by referring to historical documents and information about the murals.

To ensure the smooth progress of the restoration work, the institute enlisted the help of Bai Rongjin, an expert in armor protection and research from the Institute of Archeology of the Chinese Academy of Social Sciences.

Whenever researchers reached a milestone, Bai, now 87, would come to Gansu to guide the restoration work.

Another area of ​​complexity for the team was the difficult process of preserving iron relics. According to Zhang, protecting iron relics requires several steps, including rust removal, desalination, corrosion inhibition, and sealing.

The rarity of the find is partly due to the rules governing burial practices during this period of history.

Liu Bingbing, associate researcher at the institute, said: “It was generally not allowed to bury weapons and other military equipment without permission in the Tang Dynasty, and archaeologists never unearthed armor tombs of the Tang dynasty before.”

However, the owner of the armor was a Tang Dynasty general called Murong Zhi, a member of the Tuyuhun people, and that may have had a bearing on things, Liu said.

“The Tuyuhun people used to bury objects used by the tomb owner during his lifetime, so we assume that out of respect for ethnic conventions and his status as an imperial general, the royal court authorized the burial of ‘weapons with him at the time,’ Liu said.

The ancestors of the Tuyuhun people originated from the southern region of northeast China, and their branches then moved westward, gradually establishing an independent kingdom and eventually surrendering to the Tang authorities.

“After that, most of their clansmen held high positions in the Tang Dynasty royal court,” Liu said.

Due to Murong Zhi’s noble status, the armor is different from that of ordinary soldiers. For example, the armor has leather on the shoulders and silk lining.

Archaeologists have also unearthed more than 800 pieces of textile, wooden lacquer and other grave goods from the complex, including the first white wine found in China.

However, armor is considered to be of particular importance to scholars. According to Liu Bingbing, historical records describe various types of armor in the Tang dynasty, but earlier research into its specific form was mostly based on unearthed wall paintings and figurines.

“This discovery will provide a physical reference for studying the production process and forms of armor in the Tang Dynasty,” Liu said.

For Zhang, bringing the General’s armor back to life was a true labor of love.

“This restoration work will become a memory I will never forget for the rest of my life,” he said.