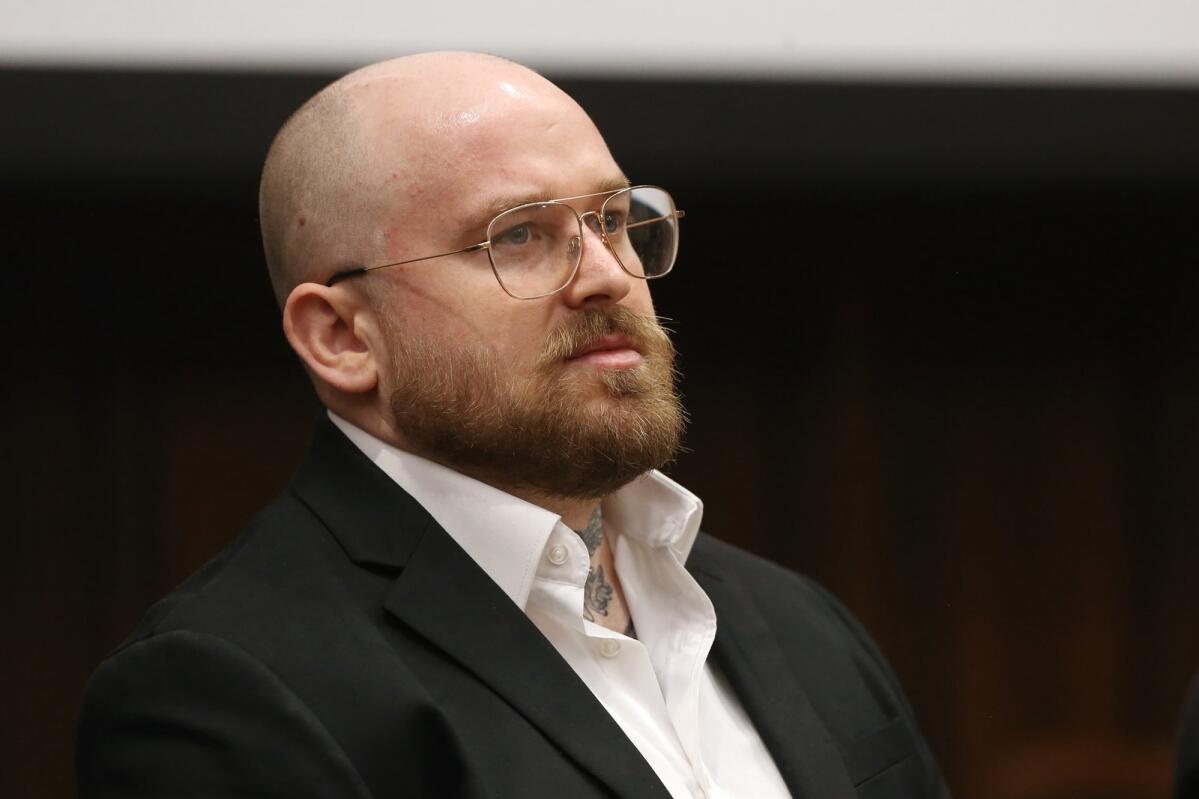 Drew Blahnik listens to opening statements on July 16 during his trial in Linn County District Court in Cedar Rapids on Friday. Blahnik is charged with first degree murder, corpse abuse and obstructing prosecution in the fatal assault on Chris Bagley in December 2018. (Liz Martin / The Gazette)

CEDAR RAPIDS – A man from Cedar Rapids already convicted of his role in the fatal stabbing attack on Chris Bagley in 2018 testified for the prosecution on Monday – telling jurors how accused Drew Blahnik committed the murder on behalf of their mutual drug dealer in revenge for the thefts.

Blahnik is on trial for first degree murder. He has pleaded not guilty and plans to claim self-defense or the defense of others during the trial.

Early in the morning of December 14, 2018, Drew Wagner said he and Blahnik, 34, went to Paul Hoff’s mobile home in Cedar Rapids to harm Bagley.

Drew Wagner is led out of the courtroom on June 22, 2020, following his plea hearing at the Linn County Courthouse in Cedar Rapids. Wagner pleaded guilty to seven counts associated with the murder of Chris Bagley and possession of marijuana and THC cartridges at the time of the murder, as well as the lack of a tax stamp. (Rebecca F. Miller / The Gazette)

Wagner was supposed to take Hoff to another room and leave Blahnik with Bagley in the front room. But soon Wagner got into an argument with Bagley, and it turned into a scramble match. Bagley told Wagner he wasn’t as tough as he thought he was. Blahnik was behind Bagley – smiling because their plan was about to be executed, Wagner told jurors.

Drug dealer Andrew Shaw wanted to see Bagley killed because he stole money and drugs from Shaw and beat him in an incident, Wagner said.

Wagner said Bagley stole amounts ranging from $ 23,000 to $ 200,000 from Shaw. He said Shaw asked Blahnik if he would kill Bagley for “something big” – he said he hadn’t heard the dollar amount. Blahnik replied that it “would cost you a lot more than that”. They spoke in November 2018 about getting an untraceable “ghost gun” with a silencer, Wagner said on Monday.

During the scramble match, Wagner said he grabbed Bagley by the shirt and threw him against a wall. He then “charged” Bagley and gave him a hug. The men were face to face and Wagner told Bagley to “relax,” he said.

Wagner said he didn’t want to hurt Bagley, but Blahnik yelled “gun, gun”. Wagner said he hadn’t seen a weapon on Bagley but had seen one on the ground. He said he never saw Bagley pick up a gun or point one at him during the fight.

Wagner then grabbed Bagley from behind and put him in a headlock to keep him from moving. He said I soon felt like “something had bit my hand.” Later, he testified, he realized he had been stabbed by Blahnik, who had intended to stab Bagley instead.

Blahnik told Wagner to let go of Bagley and Wagner moved away to retrieve his glasses which had been knocked over in the fight. Turning around, he said he saw Blahnik stabbing his arm. Blahnik had Bagley by the hair or the head, he told jurors.

Wagner said he didn’t know how many times Bagley was stabbed. According to Friday’s testimony at trial, Bagley died from 17 stab wounds to the neck and chest.

“The accused (Blahnik) is much stronger than Bagley and can fight,” Wagner said.

After the stabbing, he saw Blahnik hand the knife to Hoff. Wagner said Hoff never tried to intervene. Wagner said he “instinctively” said they should call 911.

“I saw that he was injured and needed help,” Wagner said, heartbreaking during his testimony.

Blahnik did not say the stabbing was in self-defense or suggest calling the police at the time, Wagner said. Blahnik and Hoff mentioned going to Perkins for lunch after Bagley’s death. Blahnik told Wagner that he needed to “relax if you want to get out of here.”

Hoff pulled out a tarp, like the one used for the painting, and he and Blahnik wrapped Bagley’s body, Wagner said. Blahnik handed his keys to Wagner and told him to back up his truck to the rear window. They then pushed the body out the window and loaded it into the truck. The three men helped move the body, he said.

Wagner said a piece of plywood was in the truck and placed over Bagley’s body. He drove the truck with Blahnik in the passenger seat to Wagner’s house. The knife used for the stab was in a plastic grocery bag, along with other bloody items, and was on the floor at Blahnik’s feet.

According to a surveillance video that the police found during the investigation, the men left the mobile home at 5:48 a.m. and went to Wagner’s home. During the ride, Blahnik worried about Wagner’s stab in the hand and how they would explain it. He apologized to Wagner for the way everything “turned out”. Blahnik kept telling Wagner he needed his help, Wagner said.

Blahnik took the bag with the knife and picked up Wagner’s shirt, putting it in a larger bag with other items and took it with him when he left. The truck with Bagley’s body remained in Wagner’s garage. Wagner then drove another truck to Hoff’s to help him remove the soil that contained Bagley’s blood, Wagner said.

Wagner said he went to meet Shaw at his investment firm. Wagner told him what had happened and Shaw gave him some marijuana for Hoff, a bundle of about $ 10,000 in cash, THC wax and 100 cartridges of THC for Blahnik as payment for the murder. Wagner said he didn’t want Shaw’s money, but said Shaw later tried to charge him less than usual for the marijuana Wagner would sell.

Shaw was convicted in federal court of trafficking in marijuana. The charges stem from the Bagley investigation, but Shaw has not been charged in the case. He remains in federal prison.

Blahnik picked up the truck that night and planned to go to Wisconsin for an acting and modeling event, Wagner said. Blahnik, in a name change application filed last year, aspires to pursue an acting career and has asked the court to change his name to “Johnny Church” for acting purposes. He has a hearing about it after this trial.

Wagner said Blahnik planned to bury the body in Wisconsin but did not. Instead, he took the body back to Wagner’s house and buried it in the courtyard of Soutter Avenue SE. Blahnik told Wagner that Hoff wanted to kill him and that he had to bury the body at Wagner’s so that Wagner would have something to lose if he told the authorities. Blahnik has promised to remove the body in the spring, Wagner said.

In February 2019, law enforcement obtained a search warrant for Wagner’s house and questioned him about Bagley’s disappearance. He said he told them a “partial truth” – that Blahnik stabbed Bagley in self-defense. He admitted at the stand that he had not told investigators the truth more than once.

Wagner’s testimony will continue at 9 a.m. on Tuesday. The trial is expected to take place next week.