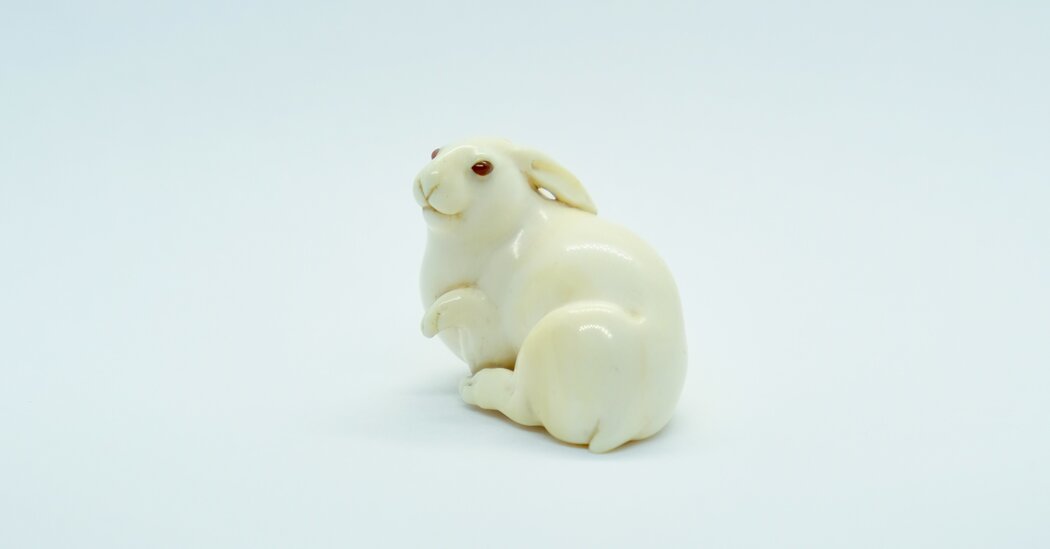 In Edmund de Waal’s house in south London is a 19th century display case at the Victoria & Albert Museum. Made of bronze and mahogany, measuring seven feet tall, it was purchased by the British author and ceramist to contain a legendary collection of miniature sculpted netsuke figures from Japan, passed down through four generations.

It has always been open for her three children, now in their twenties, to touch treasures and listen to their father’s stories, drawn from family history. One is a tiny piece of ivory and Osaka buffalo horn, signed by its maker, Masatoshi, and dating from around 1880. The little creature at rest with its foreleg raised and a glint in its eyes. amber is the piece that inspired Waal’s acclaimed and best-selling memoir 2010. On November 19, this sculpture and display case will be shown at the Jewish Museum in Manhattan as part of an exhibition based on Waal’s book , “The Hare With Amber Eyes”.

A literary phenomenon translated into more than 30 languages, the book has taken a fundamental place on any reading list about family history, the legacy of the art collection and the role of remembering things past, lost, plundered. , forgotten or forcibly dispersed. by helping to rebuild, as in de Waal’s case, an uneasy gap between the dynasty and the Jewish diaspora.

To evoke the book as it traces the fortune and fate of the influential Ephrussis – de Waal’s ancestors on his father’s side and one of the great Jewish banking families of Europe in the 19th and early 20th centuries – the museum turned to the architect Elizabeth Diller. In 2016, she oversaw the design of the museum’s groundbreaking exhibition â€œPierre Chareau: Modern Architecture and Designâ€. She undertakes the conception, conception and execution of the new exhibition with a team not only from her own company, Diller Scofidio + Renfro: it also includes the author.

“Liz is the great playwright of space,” de Waal said, speaking to Zoom from his studio, with a large mullioned window visible behind him.

For Diller, working with de Waal to shed light on the many nooks and crannies of history hidden in his book opened up important aspects of his own past.

With the design of the exhibition, Diller scripted the space from the outside to the inside, starting with the lavish residences built by Ephrussis, and the art of the signal and the objects they lavished on them, including the Ephrussi Hotel in Paris and the Ephrussi Palace in Vienna. They are limited on the one hand by the family’s origins in Odessa and on the other by the history of the Holocaust which led from Waal to Japan. The show will take place in six halls on the second floor of what equates to a younger cousin of the Ephrussi palaces, the former Warburg Mansion, where the Jewish Museum is located.

â€œRather than seeing it as a museum, we see it as a domestic setting,â€ Diller said. The guiding principle of the exhibition is the tiered collection of Japanese netsuke, in wood, ivory and porcelain, which de Waal inherited from his uncle Ignatius de Waal, or Iggie, in 1997. The museum spaces with high ceilings will contain many of the same art, objects, furniture and ephemera that brought “The Hare with Amber Eyes” to life. Recorded passages from the book read aloud by de Waal will illuminate and enrich the exhibition for visitors moving from one exhibition to another. Designing, Diller said, amounts to an exercise “that also shows the inside of Edmund’s mind.”

In keeping with this idea, the design abandoned the traditional succession of long wall texts and curatorial labels, instead weaving the many works in the exhibition into what Diller calls Wunderkammer, or cabinets of curiosities. The paintings will be hung in the tightly clustered 19th century salon style.

Display cases that refer to the luminous black cabinet that contained the 264 netsuke assembled for the first time in Paris by the great-great-uncle of Waal, the collector, art critic and patron Charles Ephrussi, will present the figurines and other small objects. â€œAs an artist and author, Edmund dives deep into the staff,â€ said Diller.

Staff have never been a hallmark of Diller’s work in architecture and design. Her biographical information systematically rare, she left to contemporaries like Frank Gehry, Daniel Libeskind or Zaha Hadid the care of framing their work in an autobiographical way. But working with de Waal’s emotionally charged travelogue, she said, had a transformational effect. “Seeing the world of her family through Edmund’s eyes,” she said, “I saw my family history as well.”

â€œEdmund dug into his past,â€ Diller added. ” I did not do it. I couldn’t take it. Designing an exhibit based on de Waal’s book changed that.

“It was a way for Liz to recognize her past,” said Claudia Gould, director of the Jewish Museum.

Framed on a Zoom call by a lakeside view at the weekend home she shares with partner and husband Ricardo Scofidio in upstate New York, Diller said, â€œ I never knew my grandparents. After the Holocaust, there were only two survivors left on each side of my family. “

Her mother, Anna, was Polish, her father, Edmund, Czech.

Diller’s mother escaped the Holocaust in Poland by moving to Vienna and hiding her Jewish identity. As the Nazis began the process of expelling Waal’s great-grandfather Viktor von Ephrussi and his wife Baroness Emmy Schey von Koromla Ephrussi from their art-filled residence on the Ringstrasse, sending them into an exile cut short for the more fragile Emmy, by her probable suicide, her own mother, Diller said, “went to work as a steelworker, then as a nanny. Her [first] her husband was supposed to follow her, but she lost him. He was sent to a concentration camp.

After the war, her mother returned to Poland, to Lodz, where she was from. She couldn’t find her family, their home had been stripped of everything and her husband was presumed dead, Diller said. â€œShe finally married my father, Edmund. Then one day my mother’s first husband came to her door. He had been a tall, tall man. When she saw him again, he weighed about 90 pounds. I never got to get the whole story from her because it’s too painful for the survivors. You are never able to get the whole story. I only have a few photographs of my pre-war family left.

Like the Ephrussians, Diller’s family was rocked by anti-Semitism. Her parents “decided to move to Paris,” she said, “but they couldn’t find work.”

They returned to Lodz. â€œMy father was a good businessman and he ran big textile factories there,â€ she said. Diller was born in 1954; she also has an older brother, George. â€œWe made a nice home in Lodz,â€ she says, â€œbut my parents gradually tried to leave Poland. There was a lot of anti-Semitism. My father was thrown in jail all the time.

In Diller’s portrait of his father are some allusions to the architect and the design force his daughter would become. “He didn’t go with the flow, he was a shaker,” said Diller, who recently completed an extensive directing for choreographer Bill T. Jones’ performance piece, “Deep Blue Sea,” in the Wade Thompson Drill Hall at the Parc Avenue Armory. The project allowed her, she said, to transform a military hall of the golden age “intended to quell uprisings” into the setting for a production which addressed “racial justice, the civil rights movement. , freedom of expression and the ideas of liberation “.

His parents eventually obtained visas for the United States through his father’s remaining brother, who was in New York, and in 1959 his family arrived in this country, settling in the Bronx and then in Inwood. and finally in Greenwich Village. Diller attended the High School of Music and Art, then the Cooper Union, where she studied art before turning to architecture. â€œMy first language was Polish,â€ she says. â€œI spoke Polish with my mother for the rest of her life. I feel culturally European and culturally Jewish. This is the cultural history I identified with when I read Edmund’s book.

As abundant as the content of the exhibition is, ranging from an enormous parochet, or curtain of the Torah sanctuary, the Stadttempel synagogue in Vienna to the canvases of Auguste Renoir and Berthe Morisot and two finely bound volumes of ” In Search of Lost Time â€by Marcel Proust, for whom Charles Ephrussi served as the inspiration for the character of Charles Swann, Diller said she felt it was crucial to add another perspective. She wants the spectators to feel in the spaces of the Ephrussi buildings the displacement, the exile and the disappearance that de Waal recounts. â€œThe buildings are empty,â€ she said. â€œArchitecture is filled with voids. These are the buildings as they are today.

To capture this, Diller asked Amsterdam-based Dutch photographer Iwan Baan to photograph interiors in the present, their past hidden by their current repurposing into offices and commercial spaces. â€œThere’s a Starbucks downstairs in Vienna,â€ Diller said.

“There is the sense of historic loss,” Diller added, “and there is the loss of Covid.” In one of the large-format photographs, at the Ephrussi Hotel, a chandelier holding a hand sanitizer dispenser stands guard at the foot of a large marble staircase.

At the same time, both Diller and de Waal have said that the present puts the exhibition in an inextricable political context that teaches about the personal element they have in common.

â€œFirst, there is a broad and painful polarization in the world,â€ said de Waal, â€œand with it a return to all kinds of toxic languages, and not just anti-Semitism, in all its grotesque forms. Second, there is the stigmatization of refugees and migrants. And I speak as a child of refugees, those who had to cross borders to survive.

Diller says she sees the exhibit as a reminder that â€œhistory unfolds in cycles. It’s very scary where we are now in terms of racism, anti-Semitism, the different neo-Nazi parties that are evolving. This is not unrelated to the stories in this exhibition. These stories need to be told. History is not forgotten.

How to get a mortgage with a credit score of 600