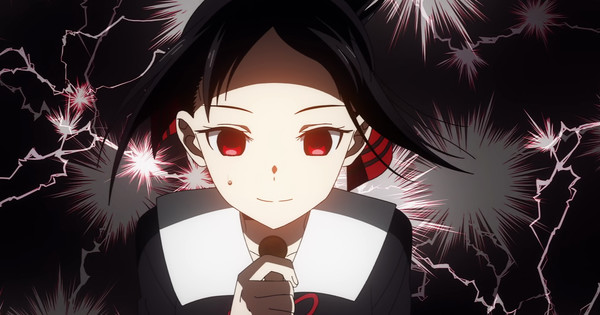 Can I say that these children are terrifying? Not only because of the amount of psychological power and manipulation they seem to have over each other, but also because of their extreme disconnect with reality. Just kidding – mostly – and watching these teenagers operate in extreme conditions, pretending they know more about everything that’s going on than they actually know, is obviously a big part of Kaguya-samathe call. I guess I just didn’t expect this episode to start as dark as it did; the opening scene where the girls break down the concept of cheating with a dead, almost violent look in their eyes made me giggle. That said, I like that there’s a narrative progression in the three skits that make up this episode, allowing them to flow from one to the next. The first sketch set up a conflict that needed to be resolved, the second introduces a character involved in that conflict and their mindset with some foreshadowing for things to come, and the third builds on some of the best parts of last week’s episode.

Although I guess it would be a bit of a stretch to say the character in the second sketch is new, considering we’ve technically seen her in almost every episode of the show. That’s right: the girl in the background who’s still stalking this couple who represents how bad things could have been if some of these characters were just being honest with themselves is finally getting a name. Suffice to say, it’s surprising that she has some kind of connection to Kaguya by being a family member of the Shinomiya branch. The show emphasizes that they are distant relatives, but the fact that said connection is a defining feature of her introduction made me think there will be bigger plans for her down the road, perhaps related to some of Kaguya’s family struggles that were brought up in previous seasons. I also enjoyed the ending to the final skit, which is not only wholesome, but crowned this episode as one of the most narratively cohesive of the season so far.

Kaguya-sama: love is ultra-romantic war is currently streaming on Crunchyroll.