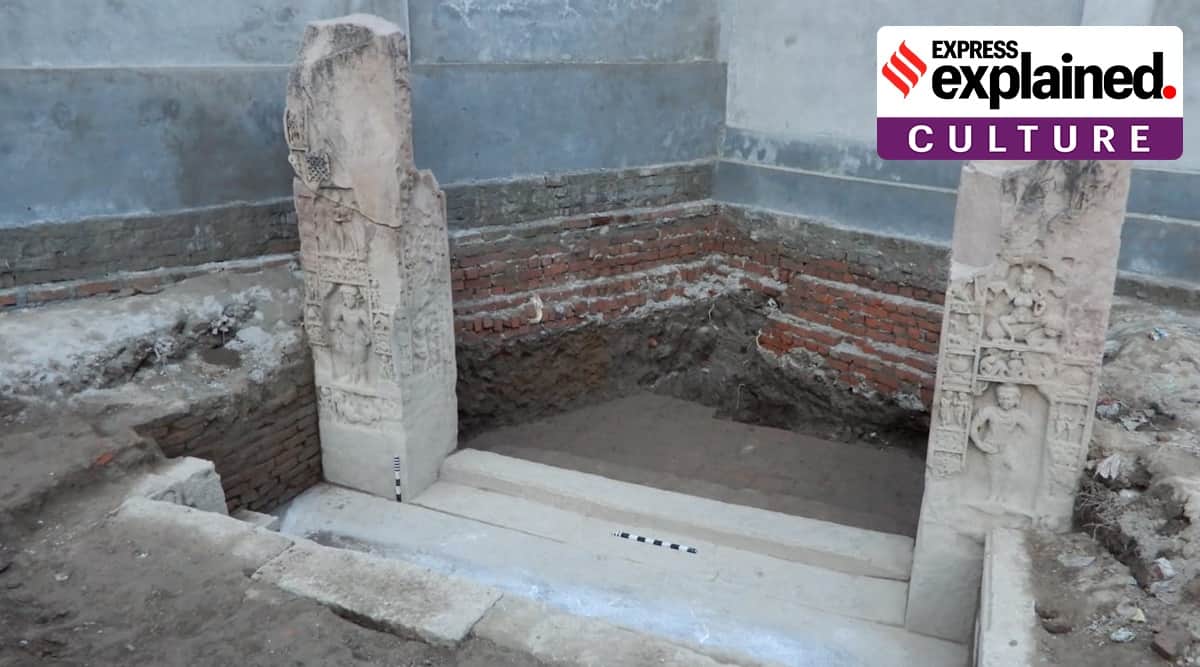 Last week, the Archaeological Survey of India (ASI) discovered the remains of an ancient temple dating from the Gupta period (5th century) in a village in the Etah district of Uttar Pradesh. The stairs of the temple bore “shankhalipi” inscriptions, which have been deciphered by archaeologists as saying “Sri Mahendraditya”, the title of Kumaragupta I of the Gupta dynasty.

Indian express explains the significance of the findings, and Shankhalipi, or the shell script.

The Bilsarh site was declared “protected” in 1928. Each year, ASI undertakes cleaning work on the protected sites. This year, the team discovered “two decorative pillars close to each other, with human figurines,” says Vasant Swarnkar, chief archaeologist of ASI’s Agra circle, adding: “To understand their significance , we conducted further searches and found the stairs.

He says that the inscription on the stairs possibly reads “Sri Mahendraditya” which was the title of Kumaragupta I.

According to ASI, the stairs led to a structural temple built during the Gupta period. The find becomes significant since only two other structural temples of the Gupta age have been found so far – the Dashavatara temple (Deogarh) and the Bhitargaon temple (Kanpur Dehat).

In the 5th century, Kumaragupta I ruled for 40 years over north-central India. The Guptas were the first to build structural temples, distinctly different from the ancient rock-hewn temples.

The inscription may read “Sri Mahendraditya,” which was the title of Kumaragupta I. (Courtesy: ASI)

What is the Shankhalipi script?

Shankhalipi or “shell-script” is a term used by scholars to describe ornate spiral characters believed to be derivatives of Brahmi that resemble conchs or shankhas. They are found in inscriptions in north-central India and date from the 4th to 8th centuries. A similar inscription was found on the back of a stone horse sculpture from this period which is currently in the Lucknow State Museum.

Shankhalipi and Brahmi are both stylized scripts used primarily for names and signatures. The inscriptions consist of a small number of characters, which suggests that the inscriptions on the seashells are auspicious names or symbols or a combination of the two.

The script was discovered in 1836 on a brass trident in the Barahat of Uttarakhand by English scholar James Prinsep, who was the founding editor of the Journal of the Asiatic Society of Bengal. A year later, he came across two other similar scripts in the Nagarjuna cave group in the Barabar Hills near Gaya. Important sites with shell inscriptions include the Mundeshwari Temple in Bihar, Udayagiri Caves in Madhya Pradesh, Mansar in Maharashtra, and some of the cave sites in Gujarat and Maharashtra. In fact, shell inscriptions are also reported from Java and Borneo in Indonesia.

Researchers tried to decipher the shell script but were unsuccessful. The first detailed study of the shell inscriptions was undertaken by Professor Richard Salomon of the University of Washington. He said there were a sufficient number of shell characters to represent the syllables of the Sanskrit language, and tentatively assigned sounds to some of the characters. In recent years, historian BN Mukherjee has proposed a decryption system based on a few key inscriptions, but his suggestions do not stand up to scrutiny.

Shankhalipi is found to be engraved on the temple pillars, columns and rock surfaces. None of these inscriptions with dates or numbers have been reported so far, although their chronology can be determined by the objects on which they are written.