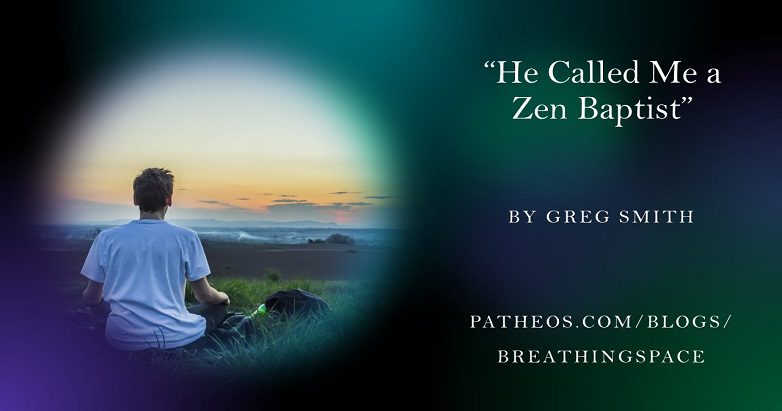 When the 95-year-old Zen Buddhist monk Thich Nhất Hạnh deceased, I reflected on the influence that Buddhism had on my Christianity.

Years ago a member of the church called me and asked if I could help him with a college project. Her religion teacher assigned each student to attend a service in a tradition other than their own. The parishioner expressed concern about exposing herself to potentially harmful influences. She wanted to know if I could help her find a “safe” place. Although I didn’t share his concern, I respected his desire to explore a different religion in a pressure-free environment. So, I arranged a visit to our local zendo.

We arrived early and were greeted by a friendly monk in traditional robes. He escorted us into the meditation hall – a large empty space with floor cushions around the perimeter. He invited us to sit cross-legged and we joined him in zazen for twenty minutes. Afterwards, he was kind enough to answer all her questions and help her with her project.

We discussed the practice of zazen, the statuary that adorned the building, and the story of the Buddha. He explained the Four Noble Truths and the Eightfold Path. When she asked him what led him to become a Zen monk, he replied, “Oh, I was a Christian minister, but I found my real path was here.”

“I knew there was something familiar about you! I said. Not that we’ve met before, but often a pastor can spot another pastor, something like gaydar.

“Yeah, you look familiar too,” he said. “You are a bit of a Zen Baptist, yourself!”

He wasn’t wrong. I took it as a great compliment (even though my parishioner was appalled). My respect for Buddhism began long before that time and will continue to this day.

Some of the first family friends I remember as a kid were Asoka and Eileen. They were South Asian Romeos and Juliets, forbidden to love each other by their Sinhalese and Tamil families. Bringing their Buddhism from Sri Lanka, they were happy to discuss their beliefs with their American friends. The visit to their house reminded me of my mother’s decoration, as both houses were adorned with small Buddha figurines and paintings of Gautama. Of course, that was in the 1970s, when such things were all the rage.

My father’s friendship with the Ganhewas impacted his later relationship with a young Thai foreign student. Pak lived with members of our church for a year when I was a child. His American “family” told him that if he was going to live with them, he had to go to church. They wanted him to hear the gospel and be saved. He attended respectfully, trusting my parents that as soon as he graduated and returned to Thailand, he would enter a Buddhist monastery. Feeling compassion for his homesickness, my father drove the two hours to the nearest Buddhist temple, so Pack could practice his faith.

At some point in my teenage years, my mother became convinced that her decorations were idols. She’s much more progressive these days, but that was in the 1980s, at the height of the “Satanic Panic.” Evangelicals were terrified of Eastern religions and the New Age movement. At that time, you could catch a demon like catching a cold. Visitors to our house must have commented on Buddha’s gadgets and told her that she was inviting evil spirits into the house. So, she got rid of all the Gautama statues except the painting which she removed from the wall but hid behind the piano, where it remained hidden for years.

My university studies in sociology and world religions ultimately gave me an open mind that would embrace diversity and see the good in worshipers around the world.. At first, however, it scared me, because I came from a small town background and a country church that taught me to fear something else entirely. When I took a course in Zen Buddhism, I recoiled from the obligation to sit in zazen. The teacher gave instructions on how to practice this basic form of meditation and told us to discuss our experience in the next class session. I remember nervously finding a spot under a tree in the local park, sitting cross-legged, softening my gaze and breathing. I remember being surprised when instead of a demon, I found peace.

Since that time, I have made meditation an integral part of my life. In addition to zazen, I studied and practiced mantra meditation, Tai Chi, Qigong and other oriental forms. I found them analogous to Lectio Divina, contemplative prayer, centering prayer, and similar Christian practices. Those who argue that Christians should refrain from meditating are afraid of the unknown. The practice has nothing to do with psychedelic doctrines or experiences. Just because something comes from another religion doesn’t mean it’s bad. They say that whatever is good belongs to me as a Christian. The goal of meditation is peace, which is, after all, a fruit of the Spirit.

You have heard that Buddhism is a philosophy, not a religion. Basically, it’s true. Most Buddhists do not believe in God. Nor do they worship Buddha as a deity, as Christians pray to a divine Christ. Siddhartha Gautama was a prince who became enlightened through meditation. He taught what he learned: overcoming suffering by releasing the ego and letting go of unhealthy desires. He encouraged right view, right intention, right speech, right action, right livelihood, right effort, right mindfulness and right concentration. In this sense, it is a philosophy. But Buddhism view beyond could call it a religion. Although as a Christian I do not believe in reincarnation, I owe a deep debt of gratitude to Buddhism. Especially Zen, which is more of a practice, like yoga, a practice that has inspired me and many other Christians.

The influence of Thích Nhất Hạnh on Christianity

Known to his students as Tie or Tay (Vietnamese for “Master”), Thích Nhất Hạnh influenced many followers of Christ. Exiled from his country of origin, he became a social activist during the Vietnam War. His teachings on nonviolence inspired Dr. Martin Luther King, Jr, and the civil rights movement in the United States. Tie founded Plum Village in France, inviting Christian monks like Thomas Merton to learn the practice of Zen meditation. When religious traditions are shared, it’s a beautiful thing. Contemplative Christians mourn his death and feel gratitude for a life like his. If you are a follower of Jesus who is interested in meditation, I hope you reject fundamentalist lies about obtaining a demon through the practice of mindfulness. And I hope that when your Buddhist friends talk about Buddha Nature, you will find it quite similar to the mind of Christ.