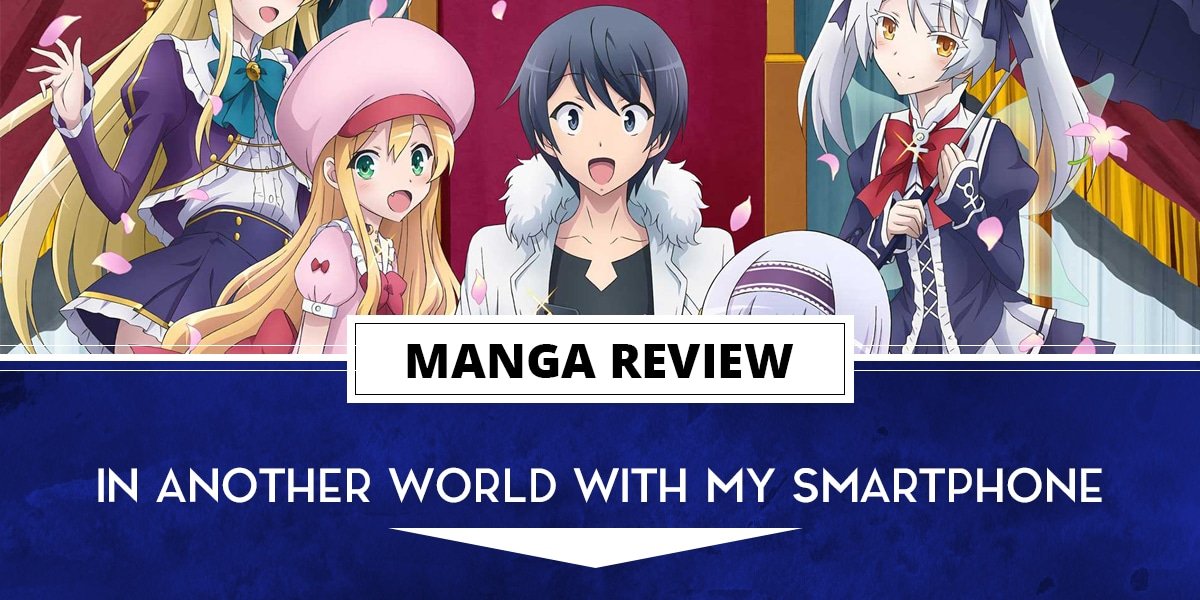 The fifth volume of In another world with my smartphone has some interesting developments. They head to Mismede and deliver the letter to the king. While enjoying the castle, Touya comes across a stuffed toy named Paula who wants him to follow him. This leads her to meet Leen, the leader of the fairies. Touya learns that Leen is Charlotte’s teacher in magic. Leen herself can use Null magic, her most important spell being Program… the ability to write instructions to inanimate objects in terms of simple movements or commands.

Since Touya can use any void spell, he takes Program for himself and begins experimenting with it in the only logical way… by crafting GUNS!

After modeling a gun, he programs it to fire and reload and even programs real bullets to explode on contact, saving him from having to chant incantations during battle. He also programs rubber bullets with paralysis to use on humans.

After their return from Mismede. Touya creates a bicycle and ends up being all the rage. While going to the store to buy equipment, he has his wallet stolen. After tracking down the thief, she gets bullied by other thieves for infringing on their territory. After saving her by shooting them with his new gun (it really took a left turn so fast), he finds out the girl’s name is Renne and she’s just an orphan trying to survive .

So we get a new character added to the stack because Renne is now working for Touya. She has a strange pendant that no one knows where it came from, but just when they’re trying to figure it out, Leen tells Touya about a way to improve the Gate spell…by combining it with Recall. Reminder lets you see someone’s memories and if you see a destination there, you can bind Gate to it, removing the requirement to have visited the location first! This leads to Touya awkwardly holding Yae’s hand, which can only mean one thing.

While we had a massive amount of new characters in the last volume, we only get two (or three if you count Paula) in this one.

The first is Leen. In addition to being Charlotte’s teacher, she has a passion for Touya! (How many girls is that now?) She desperately tries to get him to become her student but after Charlotte’s horror stories, there’s no way he’s going to put himself through such…torture. Yet, Leen learns Touya’s secret about being able to use any kind of void magic spell. This allows him to share his knowledge which leads to Gate’s improvement. Leen herself is a bit sassy and confident. She definitely has her persuasive ways but she’s not quite a complete tsundere. She’s only halfway there. This makes her a bit fun and playful, but in retrospect, she’s just another girl to add to the pile for Touya.

Reindeer must have something more because she is your typical orphan. Mom died shortly after giving birth and her father disappeared after being called out on an adventure. So she learned to fly and tried to get by. Of course, thanks to Touya’s kind heart, he takes him in, gives him a job, and even asks the king to try to forgive him. There are a few pieces here that could deepen her backstory or even branch off into another story altogether… like her pendant or the financial situation with orphanages. Other than that, she’s just a typical kid.

This volume had some nice subplots, we had a little cast expansion, and we learned a bit more about Maids and Rime. The most important thing about this volume was the ending. All the while they kept suspecting Touya to be from Eashen (despite being from Japan in our world) due to the similar culture. There were hints that Touya might just find someone there who might also have been isekai. Now that we are heading into Volume 6, things have gotten very interesting.

No doubt we’re probably ready to add more characters, but who or how many remains to be seen. What will Touya find in Eashen? So many questions to answer and with all the construction this place has been given, I expect great things to come out of this next arc! I’m sure once they get back they’ll continue all the pendant/orphanage/crystal monster stories they put together in this volume and maybe Leen can continue to teach Touya to be even more mastered than it already is!

Another good volume that made me hype for the next opus!

You can also check out other The Outerhaven reviews on your favorite social media:

This article was provided for review by Yen Press