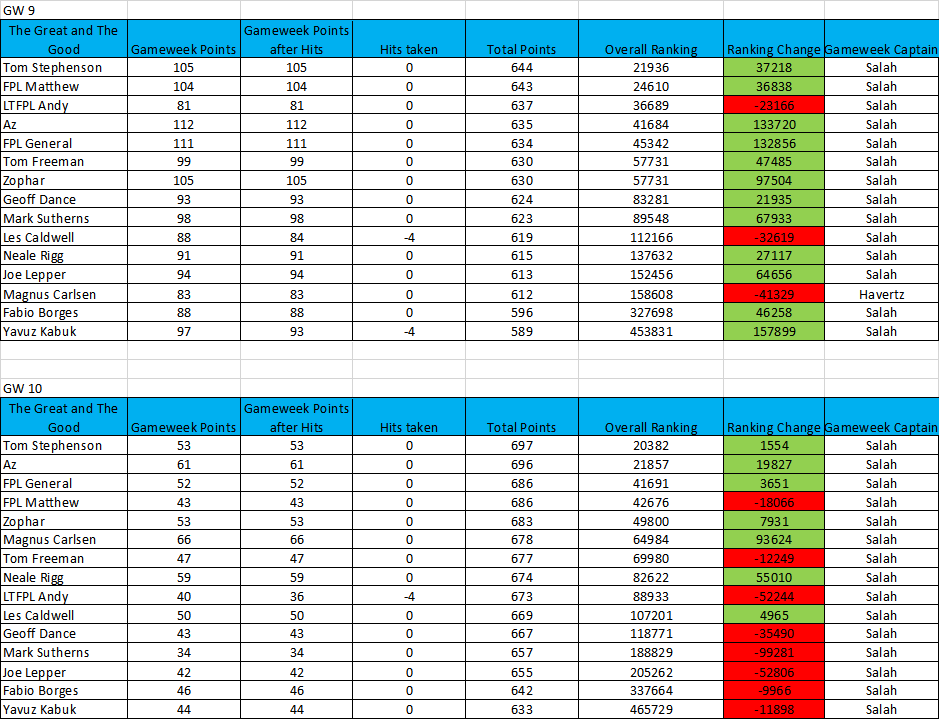 â€œIt’s time for good times. Forget the bad times, oh yeah. A day to get together to release the pressure. We need a vacation â€

While some needed a Kai havertz (Â£ 8.1million) inspired holiday post Gameweek 9, I took a real one, which was more inspired by a love of Cornish cream teas.

I came back from my short break – did I mention the frozen rolls – to find that Aaron Ramsdale (Â£ 4.7million) had returned as in the FPL General squad there was a Captain Magnus incident and, most shockingly of all, Az passed Mark. Enough to drive any man to sour cream.

Mark could no longer keep his Wildcard and pressed the “activate” button with Phil foden (Â£ 8.2million) and Son Heung-min (Â£ 10.2million) the objects of his FPL desires. Then, to add some extra box office appeal, one of The Great and The Good’s other â€œgreats,â€ FPL Matthew, laid down the most powerful of all tokens.

The discussion between who played it better might spark a bigger debate than whether to put jam or cream on a scone first, but I digress.

Az has proven he can have his cake and eat it after a strong performance over the past two weeks, which places him second in the standings and one point behind our leader Tom Stephenson.

Reece james (Â£ 5.8million) surely deserves a framed photo on his wall after hitting double digits in the two weeks. The Blackbox host was the fortnight’s top scorer with an impressive 173 points and an increase from 175,000 to 21,000.

All this and he had Emile Smith Rowe‘s (Â£ 5.6million) 13 points winking at him from the bench in Gameweek 9; what is worse is that he repeated the error in Gameweek 10 but this time Bryan MbeumoThe absence of (Â£ 5.6million) allowed him to enjoy a bit of bench stuffing. Fortunately for everyone else, he at least kept Ramsdale on the sidelines.

He wasn’t the only one to score well in Gameweek 9 because Mohamed salahThe (Â£ 12.9million) hat trick saw five of The Great and The Good scoring over 100 points, with Tom Stephenson, Matthew Jones, FPL General and Zophar all reaching the century.

General FPL had a particularly good week as his Chelsea troops from his Wildcard survived the first round of the Tuchel Tombola, Mason frame (Â£ 7.6 million) and Ben chilwell (Â£ 6.0million) provided big returns on Norwich’s 7-0 defeat.

General is still the only one of those illustrious managers to own the Blues’ midfield maestro, though I doubt many will rush to acquire his services after a shocking omission in Gameweek 10.

Speaking of Gameweek 10, Magnus dominated with 66 points; it was that man James again but Bukayo Saka Â£ 6.3 million), Raphinha (Â£ 6.6million) and Havertz also helped. The German had been the architect of the grandmaster’s collapse the week before, as he was one of many to bet on the Chelsea midfielder as captain.

The last two Wildcards have been scone this week as Mark and Matthew decided to play the most delicious of crisps.

I feel a tortured soul, in the often overly scrutinized Sutherns Wildcard, with the Maverick devil on Mark’s shoulder perhaps prompting him to make more changes and be a little less model in his choices.

However, in these uncertain times he followed the more conservative Angel in bringing in everyone’s favorites Foden, Chilwell and a triple over Brentford. It’s safe to assume the Bees will have more bite against Norwich this weekend.

Elsewhere, I suspect he may have had initial doubts about his choice of Son with a terrible Spurs performance against United. However, with a change of manager and a few decent encounters, he and Harry kane (Â£ 12.1million) is now the flavor of the week.

A minimalist approach from FPL Matthew with just five changes. I often wonder if he views the Wildcards as something he has to do, rather than wanting to do it, as he prefers the usual weekly green routine to climb those ranks.

Brentford’s double, Foden and Chilwell are all present and correct but the Ederson The pick (Â£ 6.0million) will attract attention as he is the only one of those selected managers to have a hard-hitting keeper.

Here is a summary of the transfers for this week:

Gameweek 9’s transfers were dominated by the debate over Lukaku’s best replacement, with Vardy being the preferred option but Kane and Ivan Toney (Â£ 6.6million) also in the running. Fabio wins by default on this one because his shot for Raul Jimenez (Â£ 7.6million) at least provided an assist and a goal.

In Gameweek 10, we saw a clamor for Foden and Toney. I was surprised to see Tom Stephenson pick the Brentford forward as he was one of the few not to accompany him at the start of the season.

As for Foden, his unauthorized help meant he had made a disappointing debut for most of The Great and The Good. Andy will likely regret ditching Raphinha for a hit as part of the deal to bring him in and poor Yavuz continues to suffer from bad variance as he moved to Smith-Rowe to host Stockport Iniesta. .

The template for The Great and The Good is as follows with a number in parentheses indicating the number of teams they appear in: –

Despite the Wildcards and the transfer frenzy, it’s only the front row getting a makeover with Vardy and Toney coming in for the big names in Romelu Lukaku (Â£ 11.5 million) and Cristiano Ronaldo (Â£ 12.4million)

Neale stayed with Cristiano and enjoyed his double-digit returns this weekend; who would have thought that superstar ‘Siu’ would have been a differential? I doubt that will be so as the matches turn out in Gameweek 14/15.

Let’s take a quick look at the stats for the season to see how managers are making these key metrics: –

Mark is still leading the way on Harbourmaster’s Points and that won’t change if Salah’s current story of Salah’s permanent Harbourmaster continues. I wonder who will be the first to break and go for a differential.

Resolve will be tested over the next few weeks with a potential rebound from the new Spurs manager combined with a sea of â€‹â€‹green games. Harry Kane vs. Everton, are you interested?

There are some surprising names at both ends of transfer successes: I wouldn’t expect FPL Matthew to be on top of the mountain minus four, and I wouldn’t have expected Magnus to take one more.

On the value side, Tom Stephenson continues to reap the rewards of some early season gains at 103.4 and Neale is the poor cousin with two million less.

A vacation gives you perspective as well as a booming waistline after all those scones. Over the past few weeks we all seem to be loading ourselves up after the last inescapable transfer from Havertz to Toney, but maybe we need a little more patience.

Management of Pep and Tuchel’s squad will continue, as will unforeseen injuries. Andreas ChristensenThe drama of dental work (Â£ 5.0million) certainly put a smile on my face.

So, rather than chasing those points, let’s take a break, accept rotations, and take a transfer vacation. You never know, you might gain a bit of rank by stepping away from this DIY. Wouldn’t that be “so nice”.

Anyway, that’s it for me for now, and remember: don’t have nightmares about cream teas or anything.

For those concerned with any of the topics covered in the above article, you can find me on Twitter here.

Register now to get the following: