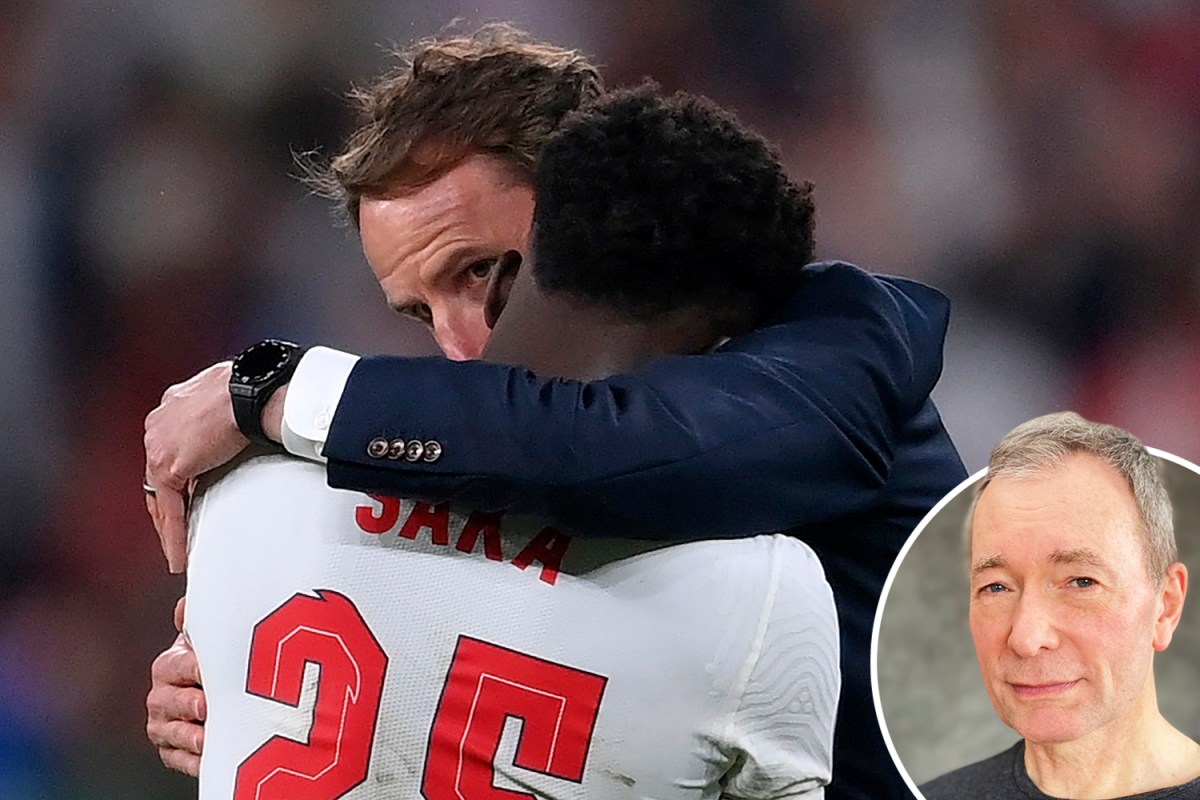 AFTER reaching a collective peak for a month, the country is now suffering from a touch of Euro Long.

And a sadness that goes beyond losing a great football game.

Because the clock has been brought back to less happy times.

A drunken crowd without tickets swarmed Wembley Stadium and ruined the night for thousands.

Three young men who had the courage to take sanctions were the subject of racist abuse that could stem from the darkest days of the 1970s.

And after four weeks of what appeared to be true national unity, everything that separated us before those euros has come back in force.

England team’s day trip to 10 Downing Street quietly canceled after Tyrone Mings suggested Home Secretary Priti Patel ‘stoked the fire’ of racism for failing to speak out English fans who weren’t too keen on the players going to their knees due to his association with the Black Lives Matter protested.

Tyrone seems to believe that anyone who objects to “taking the knee” is racist.

But Twitter brutally stacked Patel – the daughter of Ugandan Asians who fled Idi Amin in the UK – shouting that she MUST be racist because she is a conservative who backed Brexit.

After the collective euphoria of the Euro, we were suddenly talking about jargon, racism, kneeling and – God help us – Brexit.

When England rushed to their first final in a major tournament in over half a century, this country felt more united than it has in years.

And if you remember the Dark Ages of football, the sight of thousands of ticketless fans swarming Wembley will have made your blood run cold.

Because that’s how tragedies happen. This is how people die.

There was a blancmange circle around Wembley on Sunday night that was smashed with sickening ease by thousands of drunken morons.

How much? Nobody knows. But enough to leave the children in tears. Enough for a fan to shout at a flight attendant: “Do your fucking job!”. Enough to crush the ribs of Harry Maguire’s father, Alan. Enough for ex-Leeds United player Dominic Matteo to leave the game before it even starts.

“The stewards were not equipped to handle this garbage and the police were too slow to respond to the violence,” Matteo said.

“I didn’t even stay to watch the game as the atmosphere was so hostile at so many different entry points with the children present being pushed to the ground, scared and crying.”

They’re all blaming each other now, everyone responsible for the Wembley White Mouth Wall. The truth is, they all failed.

The football authorities who are ultimately responsible for the smooth running of the tournament.

The police who cowardly ceded Wembley Way to an army of aggressive rat-faced morons.

And the hapless stadium stewards who were too scared, inept or corrupt – at least one was seen with his pockets full of cash – to do their job.

It is a miracle that no one is dead.

I feel like the clocks have been turned to the football culture of my youth and my young manhood. Aggression. Synchronized vomiting.

But in the bad old days, racist insults were shouted shamelessly and unpunished from the terraces and stands.

Now he has retreated into the foul shadows of social media.

The Center For Countering Digital Hate found 106 accounts targeting Rashford, Sancho and Saka, 59 of them based outside the UK.

When 30 million people watched the game and the streets around a degraded Manchester mural of Rashford are filled with nothing but love, those numbers surely suggest – don’t they? – that the overwhelming majority of us are appalled by racism.

This love for Gareth Southgate’s multiracial England team – and the influx of support for Rashford, Sancho and Saka – doesn’t suggest to me that this country is a cesspool of racism.

And let’s not forget, football was great. This tournament was exactly the boost our country needed after 55 years of failure, five years of Brexit and 16 months of a global pandemic.

A golden month of football has united our country in a way we haven’t in many years. Let us try to keep this feeling of national unity.

It would be the greatest prize of all.

I’m gonna do it the Maya way, thank you guys so much

MAYA Jama curls up in a private jet with a big smile that suggests she doesn’t care about the world.

Not the chaos at Heathrow. Not the Balearic Islands which come off the green list at 4 a.m. tomorrow morning.

And not the news that five million Britons have received Oxford-AstraZeneca vaccines made in India that have yet to be approved by the European Medicines Agency.

Nothing bothers Maya in her private jet.

Are we to assume that he never left the track?

The blame game is crazy

I remember the 1998 World Cup in France, when the effigy of David Beckham – with Alice’s band – was hung from streetlights.

My editor at the time, Piers Morgan, had me write an article comparing and contrasting Michael Owen and David Beckham.

Owen had just scored one of the great goals of the World Cup, against Argentina.

Beckham had been sent off after 47 minutes in the same game for an irritable kick to Diego Simeone, who predictably acted like he had been shot.

England fought heroically with just ten men, but came out after extra time and a penalty shootout.

It was universally believed that we could have won the game and maybe the World Cup if Beckham hadn’t been sent off. So Beckham was vilified.

You would never have guessed that years later we would all get over it and David would become a national treasure.

A timely reminder for all of us.

PRINCE Harry and Meghan’s Oprah interview is shortlisted for an Emmy Award in the Outstanding Hosted Non-Fiction category.

‘Three days before our wedding we got married,’ Meghan memorably told gullible old Oprah, saying the happy couple’s real wedding ceremony took place in their backyard in the presence of the Archbishop of Canterbury.

Is this laughable flight of fancy ready for a non-fiction gong as well?

GILLIAN Anderson reveals that she has stopped wearing a bra and will never wear one again.

â€œI don’t care if my breasts reach my navel. I no longer wear a bra. They are just too uncomfortable.

I felt the same unease after seeing Gillian play the part of Margaret Thatcher in The Crown. The artificial accent, the hunched back, the exaggerated manners. It was uncomfortable.

GEORGE Michael’s estate is accused of having cashed in his memory with an ‘overpriced tat’, including an ugly figurine that you own for Â£ 150.

This George ornament has no place on someone’s fireplace.

It belongs to a dumpster.

WHEN he was Secretary of Health, Matt Hancock imposed the most draconian restrictions on British freedom ever seen in peacetime.

But while Matt told you that you couldn’t kiss your mother at your father’s funeral, he was secretly collecting saliva samples from his hired aide.

Caught on CCTV with his hand exploring the contours of assistant Gina Coladangelo’s butt, his tongue tickling her tonsils and baldness glowing romantically under the striped lighting, Hancock revealed himself as a hypocrite of unfeasible proportions.

He betrayed each of us who were kept away from the people we love.

The Sun Scoop did exactly what the newspapers are supposed to do – it spoke the truth to power, it dragged the double standards of the powerful into the light of day.

And whoever denounced the hypocritical Secretary of Health has done this nation a tremendous public service.

But on Thursday, authorities fought back.

The Information Commissioner’s office – Britain’s data watchdog – raided two homes, seizing computers and other devices in search of the whistleblower.

The ICO exists to ensure that the private details we give to government and businesses are held responsibly.

There is no such thing as keeping ministerial loves secret.

There is no such thing as making whistleblowers regret having made vital information public.

There is no such thing as putting off future whistleblowers when the next minister is caught with his metaphorical pants down.

Whoever exposed Hancock’s hypocrisy doesn’t deserve to be hunted down.

They deserve a medal.

A Beginner’s Guide to Everlasting Sapling