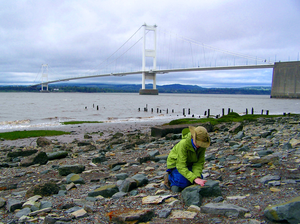 Microplastic pollution lingers in rivers for

Microplastics can settle and linger in river beds for up to seven years before dumping into the ocean, according to a new study.

Today, researchers led by Northwestern University and the University of Birmingham in England have found that hyporheic exchange – a process in which surface water mixes with water in the riverbed – can trap lightweight microplastics that would otherwise have to float.

The study was published today (January 12) in the journal Science Advances. This is the first assessment of microplastic accumulation and residence times in freshwater systems, from sources of plastic pollution throughout the watercourse. The new model describes the dynamic processes that influence particles, including hyporheic exchange, and focuses on difficult-to-measure but abundant microplastics of 100 micrometers and less.

“Most of what we know about plastic pollution comes from the oceans because it is very visible there,” Northwestern’s said. Aaron Packman, one of the lead authors of the study. “Now we know that small plastic particles, fragments and fibers can be found almost anywhere. However, we still do not know what happens to particles released from cities and sewage. So far, most of the work has been documenting where the plastic particles are and how much reaches the ocean.

“Our work shows that many microplastics from urban wastewater eventually settle near the source of the river and take a long time to be transported downstream to the oceans.”

Packman is professor of civil and environmental engineering at Northwestern’s McCormick School of Engineeringand director of the Northwestern Water Research Center. He is also a member of Plastics, Ecosystems and Public Health Programto Institute for Sustainability and Energy at Northwestern. Jennifer Drummond, University of Birmingham researcher and former doctoral student. a student in Packman’s lab, is the study’s first author.

Modeling of movement in microplastics

To conduct the study, Packman, Drummond and their teams developed a new model to simulate how individual particles enter freshwater systems, settle and then remobilize and redistribute later.

“The retention of microplastics that we observed was not a surprise as we already understood that this happens with natural organic particles,” Packman said. “The difference is that natural particles biodegrade, while a lot of plastics accumulate. Because plastics do not degrade, they stay in the freshwater environment for a long time, until they are washed away by the flow of rivers.

Using the new model, the researchers found that microplastic pollution resides the longest at the source of a river or stream (known as the “headwaters”). Upstream, the microplastic particles moved at an average speed of five hours per kilometer. But under low flow conditions, this movement slowed down to rampant – it took up to seven years to move just a kilometer. In these areas, organisms are more likely to ingest microplastics in the water, which could degrade the health of the ecosystem.

Now that this information is available, Packman hopes researchers can better assess and understand the long-term impacts of microplastic pollution on freshwater systems.

“These deposited microplastics are causing ecological damage, and the large amount of deposited particles means that it will take a long time for all of them to be removed from our freshwater ecosystems,” he said. “This information leads us to determine whether we need solutions to eliminate these plastics in order to restore freshwater ecosystems.”

The study, “Accumulation of microplastics in river bed sediments via hyporheic exchange from sources to main waters”, was funded by an international scholarship from the Royal Society Newton, an individual Marie Curie scholarship, the German Foundation for research, the Leverhulme Trust and the National Science Foundation.

The title of the article

Publication date of the article

Warning: AAAS and EurekAlert! are not responsible for the accuracy of any press releases posted on EurekAlert! by contributing institutions or for the use of any information via the EurekAlert system.