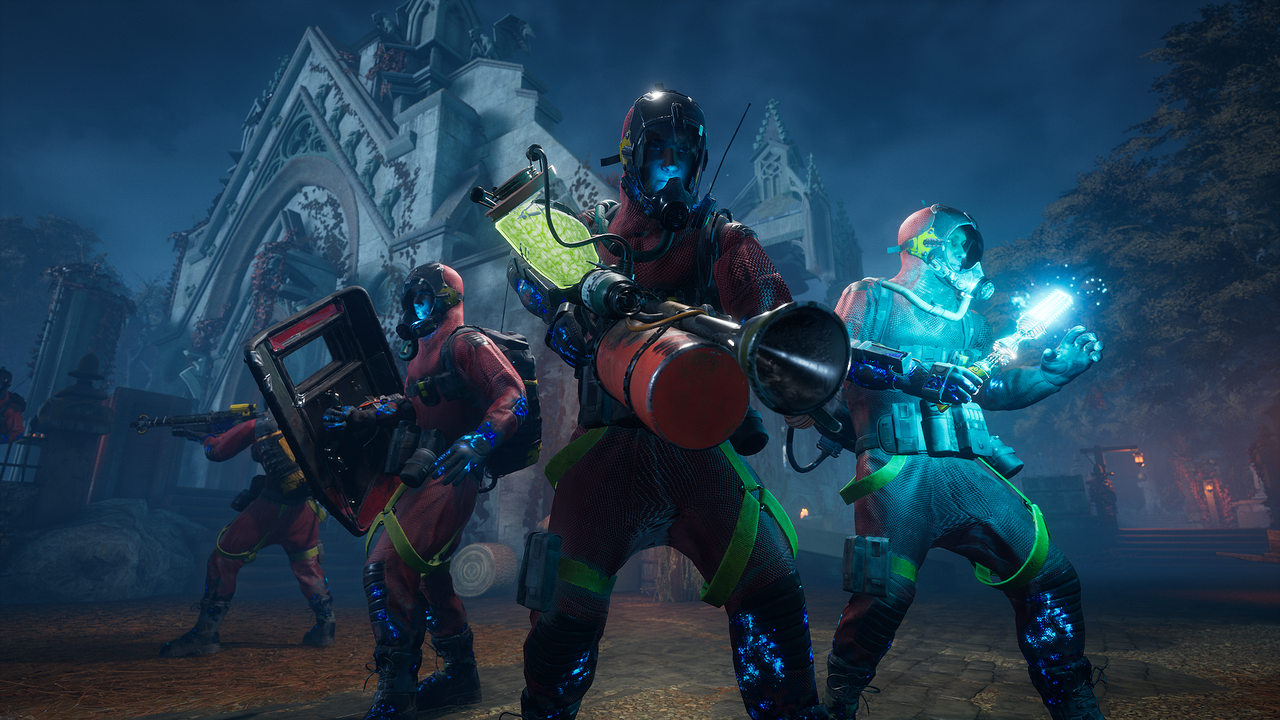 When things go awry in the night, the solution is to shoot those things with a huge salt-filled shotgun up to the muzzle. Or a spectral energy cannon. Or a shoulder harpoon. And when your poltergeist parasite is nothing more than ectoplasmic slime on the ground, you can suck it up and consider the ghost exorcised. It’s business as usual for Midnight Ghost Hunt, a ghost-busting PvP game from new studio Vaulted Sky Games.

However, after playing a few games with the devs, I found out that explosive spirits were just one of many ideas for Midnight Ghost Hunt. Its 4v4 setup is split into two teams, Hunters and Ghosts, each with very different goals and playstyles. As a hunter, you play an FPS where you enter a haunted location with the goal of finding and eliminating the four enemy specters inside. Ghosts, meanwhile, must disguise themselves as one of the dozens of everyday objects that litter the map in an attempt to avoid would-be Venkman until the game clock strikes midnight.

Hide and seek with proton packs, then. But there’s a lot more going on that gives me reason to think Midnight Ghost Hunt might be more than just an unlicensed Ghostbusters novelty. A lot of that comes from its asymmetry, which is surprisingly Rainbow Six Siege-ish in its execution. Each match consists of three distinct phases, starting with 90 seconds of preparation during which ghosts can explore the map to find the perfect item to possess and set up defenses. Simultaneously, hunters choose their equipment off site.

In the second phase, hunters have five minutes to search for and destroy enemy ghosts. An inventory of delightfully analog gadgets, such as the footprint-revealing Pathfinder and noise-detecting Spectrophone, can be used to help hunt down ghosts. But finding out that a chair or a basketball or even a duck is actually a ghost is just the beginning; you’ll then have to destroy it with your ramshackle ghost guns – an activity that always seems to result in a fun Looney Tunes-like chase around the map – then suck up the ectoplasmic remains to make sure it can’t be resurrected by its teammates .

Echoes of the dead are transformed into nuclear missiles that scream “boo”.

Unlike Hunters, Ghosts are unable to directly deal damage and therefore have a much more defensive playstyle. In addition to being able to hide in objects, they can deploy a variety of abilities to distract or delay their predators, such as spectral hands that stick out of the ground to hold a hunter in place, or objects that whistle through the air to get away. to crush. passing enemies. Essentially an arsenal of debuffs, the idea is to use these skills to last as long as possible, rather than killing hunters. Indeed, if the ghosts can survive the five minutes of this phase, then the game clock strikes midnight and things get much more violent.

If the ghosts are able to trigger this third and final phase, all destroyed ghosts are resurrected and the entire team transforms into terrifying and powerful specters that can attack with brutal effect. It’s an abrupt change in circumstances that painstakingly bursts the tension bubble as echoes of the dead are transformed into nuclear missiles that scream “boo.”

This “midnight” phase lasts four minutes and is a tumultuous party for ghosts, but an agonizing bloodbath for hunters. In principle, I really like this flipping of the tables, and it’s a wonderful reward for a team of ghosts who managed to escape destruction. It also brings the Ghostbusters fantasy to life for both teams; in the six rounds I’ve played, this has always proven to be the most intense and high-energy segment of a game. It also perfectly evokes the action sequences of ghost movies, which is clearly what Vaulted Sky is all about. But I can’t help but feel that, in its current format, the Midnight Phase is just a long, brutal punishment for faltering Hunters. They technically can survive those four minutes and get out alive, but the odds seem to be stacking up skyscraper-high against a crew of fighters.

With Midnight Ghost Hunt just entering closed beta on PC via Steam, however, there’s plenty of time for that to change and improve. I’m hoping Vaulted Sky Games can find an approach that retains the fear but provides better balance in this endgame, because I’m impressed with everything else. The intermediate hide-and-seek phase seems, at least in the short time I’ve been there, to be admirably balanced. The ’80s layout is seriously cool, and the card designs are happily inspired by classic horror tropes. Each weapon, gadget, and ability seems to offer a unique tilt, and I can imagine them being used to create a variety of different specializations within a team. And compared to other Prop Hunt-style games I’ve played, it stands out for its potential depth and simple raw excitement. It’d be a shame if four minutes of carnage tarnished all of that, so I’ll light a few dark spirits candles and hope Midnight Ghost Hunt can find a way to fully deliver on its chilling promise.

When to apply for a credit card after bankruptcy