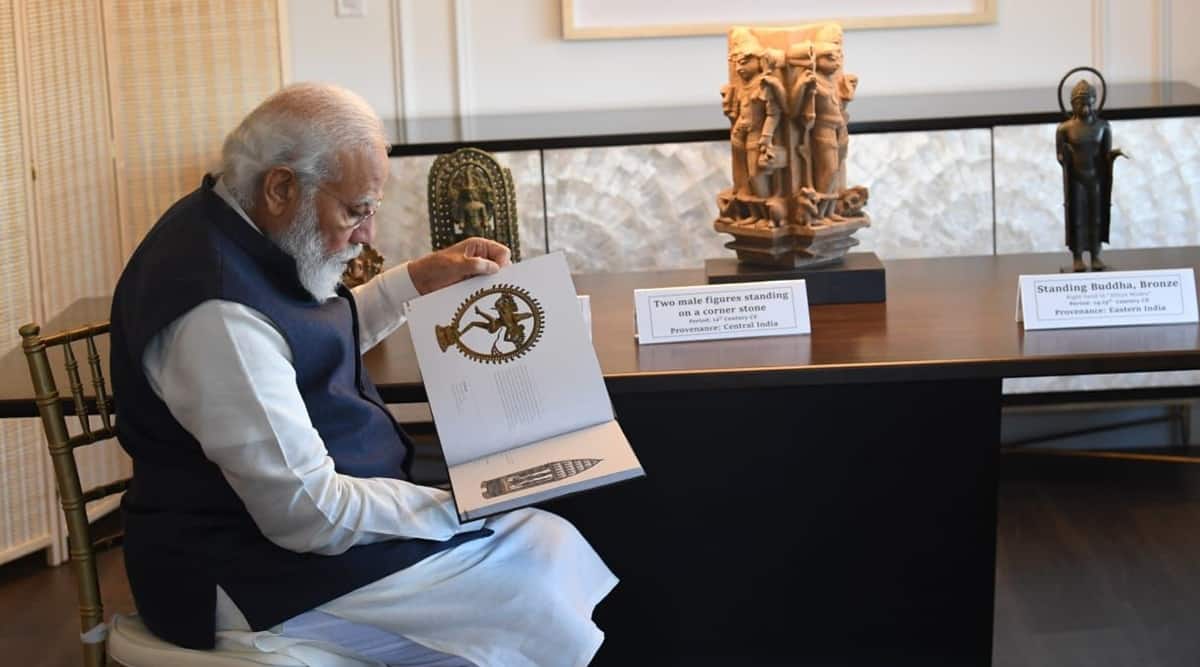 No less than 157 objects and antiques were handed over by the United States during Prime Minister Narendra Modi’s visit to the country.

The listing contains a diverse set of items – a 1.5 meter bas-relief of Revanta in sandstone made in the 10th century, an 8.5cm tall bronze figure of Nataraj from the 12th century, 56 terracotta pieces , several bronze figurines and copper objects, among others.

The objects, which were stolen or smuggled out of India over a period of time, mostly belong to the period between the 11th and 14th centuries. The restored antiques include an 18th century sword in its scabbard, with the inscription mentioning Guru Hargobind Singh in Persian.

There are also several historical antiques, including an anthropomorphic copper object dating from 2000 BC. While 71 artifacts are cultural, the rest include figurines relating to Hinduism (60), Buddhism (16) and Jainism (9), he said.

One of the works is a painting on paper depicting Rasikapriya by an anonymous painter, possibly influenced by the famous works of Rasikapriya composed by the 16th century poet Keshava Das. The reverse of the painting bears a rubber stamp, which indicates that it was once part of the personal collection of the Maharaja of Bikaner and was duly adhered to in 1964.

During the meeting between Modi and US President Joe Biden, the two leaders also “pledged to strengthen efforts to fight against theft, illicit trade and trafficking in cultural objects,” it was announced. .

In 2019, a team from the Archaeological Survey of India (ASI) visited New York and identified nearly 100 of these artifacts, seized in the United States, as “original Indian antiquities of value. priceless â€, known to be stolen from temples in Tamil Nadu. and Madhya Pradesh and smuggled abroad. ASI ADG, Archeology, Urmila Sant, who was part of the team, had told The Indian Express that they had traveled to the United States following a call from the Indian Consulate General’s office to subject of the seized objects.

“We have identified a hundred ancient objects, including idols dating from the Gupta period (5-6th century AD) and terracotta objects from Harappan culture,” she said. Sant also said 17 artifacts were seized by US Immigration and Customs Enforcement, Homeland Security, from the storage of art smuggler Subhash Kapoor.

In addition to these, the 56 terracotta objects returned by the Toledo Museum, Ohio, to the Indian Consulate have also been declared to be artefacts. These were donated to the museum by Kapoor. The majority of them belong to Chandraketugarh, West Bengal, an important site of terracotta art.

Once the contraband / stolen items are seized in another country, the entire process of identification and return to the country of origin can take over a year. Between 2014 and 2021, more than 200 stolen antiques have been or are in the process of being returned to India, according to ASI, which is the custodian of these items once they return to India.

Once ASI receives these 157 objects from the PMO, the artworks will be sent to the original locations from which they were stolen after due process.