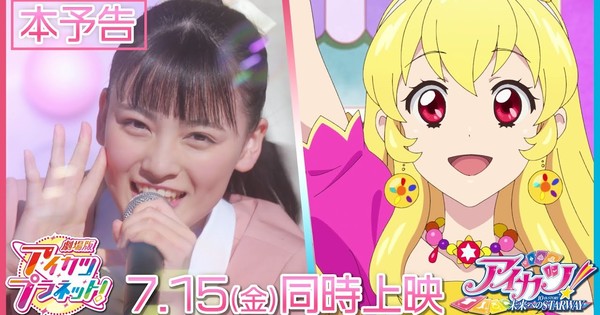 The official site of Pictures of BN‘ Planet Gekijō-ban Aikatsu! the film began airing a trailer for the film along with the accompanying Aikatsu! 10th Story ~Mirai e no Starway~ movie Thursday. The trailer presents a preview Aikatsu! Planet ending theme song “Bloomy＊Smile” by main protagonists Ichigo Hoshimiya and Akari Ōzora as Unit Cosmos. It also reveals and foreshadows the Aikatsu! 10th Story ~Mirai e no Starway~ theme song from the movie “My Starway” by Waka Kirishima, Furi Uebanaand Yuna Ichikura (performing their characters in the Sun unit).

The accompaniment Aikatsu! 10th Story ~Mirai e no Starway~ (Starway to the Future, an apparent reference to the Japanese translation of Led Zeppelin’s song “StaIrway to Heaven”) marks the film franchise10th anniversary. The All-New Story of the Original Aikatsu! series brings together the director of this series Kimura, screenwriter Yoichi Katoand character designer Hiroko Yaguchi.

The two films will open side-by-side on July 15.

The Aikatsu! 10th Story ~Mirai e no Starway~ the film’s teaser visual shows main protagonists Ichigo Hoshimiya and Akari Ōzora in their first outfits as the Cosmos duo (from the TV series finale). The film’s story introduction reveals that Cosmos’ first live concert was a great success. Later, Ichigo faces graduation from Starlight Academy in six months – but even after graduation, an idol’s life goes on.

The story revolves around “Aikatsu Planet”, a world where anyone can assume the role of an avatar and become an adorably cute idol. Mao Otoha, an ordinary first-year student at Seirei High School private academy, becomes the No. 1 Hana when Hana’s previous alter ego Meisa Hinata suddenly disappeared. However, Mao’s new role as the Hana avatar is a secret to everyone. The project slogan is: “To become the ‘me’ I want to be, I step into the mirror.”

The project used anime and CG to depict scenes from the “Aikatsu Planet”, and he used live footage to depict Mao’s daily life.

Pictures of BN was credited with the development, original story, and production of the project, and Bandai was credited with the original concept. Ryuichi Kimura served as both chief executive and director, and Misuzu Chiba supervised the scripts for the series. Risa Miyadani designed the characters. Tohokushinsha Film Society produced the live footage. The characters Mao, Ruli, Kyōko and Shiori sang the opening song “Bloomy*Smile”, and the new Starry Planet unit sang the theme song “Happy ∞ Aikatsu.”