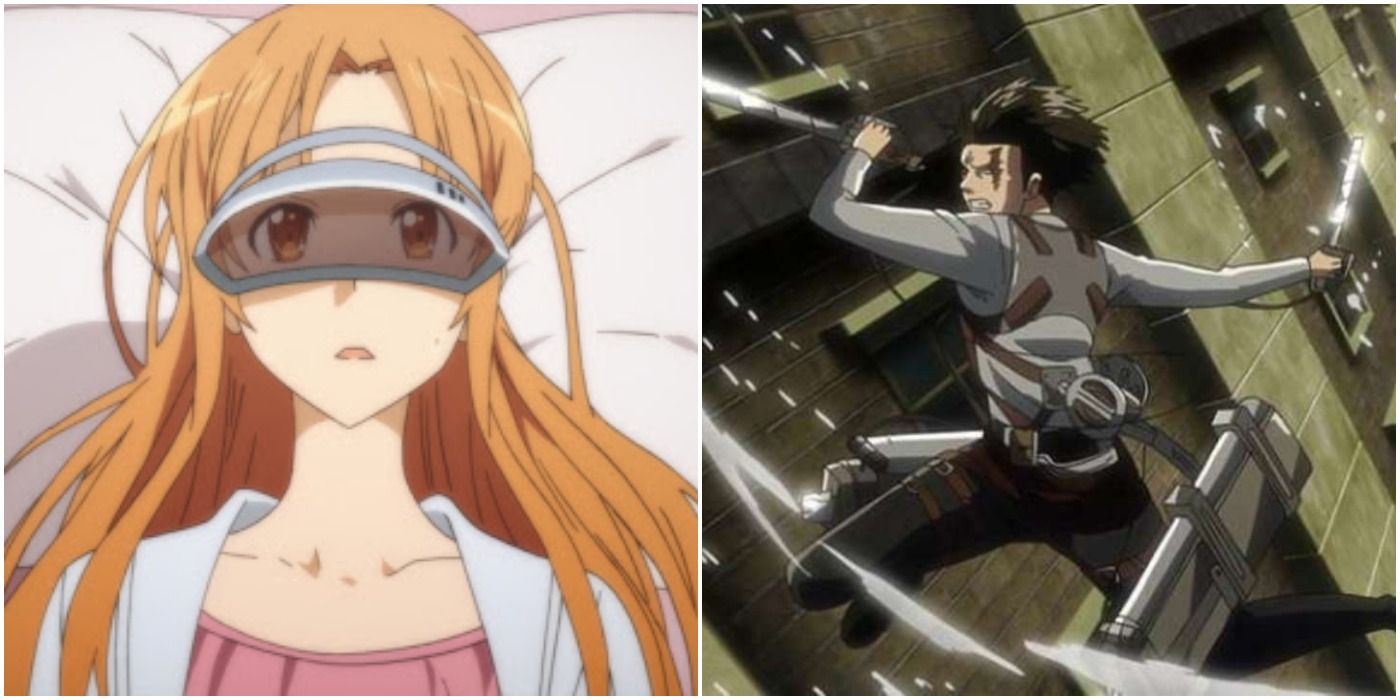 Anime fans often view the medium as a form of escape. Animation lends itself well to telling more fantastic and creative stories that aren’t held back by the flaws that people can often spot in the special effects of live-action movies. That’s why, when the anime gets creative and features amazing fictional technology, it’s easy to get into it.

Some gadgets are useful items that would make everyday life much more convenient, while others are wonderful futuristic tools that allow characters to change aspects of themselves or the world around them. Whatever their goal, the coolest tech in anime is always captivating to watch.

Most people will never feel like Spider Man as it swings across the rooftops of New York City, but the residents of Paradis Island don’t. The Omni-Directional Mobility Gear used by Survey Corp is a gas powered means of transportation.

By pulling high-powered grapples from an equipped harness, the technology allows its trained users to take to the skies. Those who are proficient in ODM Gear can point to any surface, use their momentum to alter course, and even change direction in mid-flight.

Virtual reality technology has come a long way in real life, but it’s still a long way from what’s seen in Sword art online. The infamous NerveGear trapped its players in the virtual world of Aincrad and was later replaced by the second generation of AmuSphere.

Both VR consoles provided stunning immersion, making users feel like they were truly transported to a fantastic virtual world to play out the VRMMO fantasies they’ve always dreamed of.

8 Gear is the future of sports (Megalobox)

Boxing is already a dangerous sport, but in the dystopian context of Megalobox, Gears make it exponentially more. Either attached to or infused into the arms, Gears act as a mechanical enhancement in the speed, power, and reflexes of athletes entering a boxing ring.

They increase the intensity of an already violent sport, and beyond the ring, Gears are even powerful enough to be used for construction or other strength-based activities.

Holograms in Yu Gi Oh ! do an amazing job of bringing the creatures in the Duel Monsters card game to life. This technology reaches its peak when KaibaCorp manages to make dueling arenas portable with the creation of the Duel Disk.

Attached to the duelist’s arm, the Duel Disk can instantly deploy to prepare for a match, shoot small cameras to project holograms, and even contains all the necessary functions such as slots for map areas and a automatic shuffle function.

Weather is something that people often wish they could control, rather than being at the mercy of nature. Yet for Nami of the Straw Hat Pirates, it is a reality. With her trusty Clima-Tact, Nami can instantly create barriers of fog, rain, and even produce small cyclones or mirages to aid her pirate teammates in a pinch.

Outside of combat, the wand is also handy for cleaning the sky and helping with ship navigation, as well as any leisure time pirates may wish to have.

Shrinking almost any physical object nearby and ready to materialize in its actual size feels like a dream come true, but Dragon ballhistory is a reality. Manufactured by Capsule Corporation, Hoi-Poi capsules are capable of miniaturizing and storing much larger sized objects, such as entire sofas, refrigerators, or even a house.

Depending on the user, the usefulness of these capsules can also vary widely. Some may use them to transport tanks or other military vehicles.

4 Time Travel Microwave Makes Forgery of the Past a Reality (Steins; Gate)

Everyone wanted to time travel at least once. Fictional media involving stories of time travel often shows how powerful this ability can be, but it is also fraught with dangers. In Steins; Gate, the ability to time travel comes in many forms, but the microwave is the most iconic.

Set up by members of Rintaro Okabe’s Inner Circle Lab, the fascinating experimental microwave gives the characters a method of traveling between the lines of the world to return to the past, simply by heating a few bananas inside.

3 Automail is the best prosthesis humans can ask for (Full Metal Alchemist: Brotherhood)

Artificial prostheses are unfortunately needed by more and more people in the real world. But, what if reality had Automail? The fictitious Full Metal Alchemist: BrotherhoodTechnology allows people to create metal armored prostheses to replace body parts of amputees.

More versatile than a regular prosthesis, Automail is linked to the user’s nervous system and thus offers greater control and flexibility. It’s even advanced enough that it can be modified for combat.

Weapons in cartoons seldom become as iconic and deadly as the portable Dominator psychological diagnosis and suppression system. The Transformative Handgun is used by Public Security Bureau inspectors and constantly reads the crime coefficient of its targets before deciding whether its human can pull the trigger.

It is this criterion that makes it particularly unique. Once the AI ​​Sibyl system considers a person a criminal, the awesome Dominator can transform into ‘deadly eliminator’ mode and literally smash the potential villain to smithereens.

There are few gadgets in anime as well-known as the Poké Ball. The small device can capture and house any wild Pokemon that a trainer can encounter. It can then be launched to release said Pokémon.

They can be used to participate in Pokémon battles, but can also be a handy way to keep friendly creatures nearby at all times. Poké Balls come in many varieties depending on the region and the specific types of Pokémon they are designed to catch. Pokemon because a series would not be the same without them.

NEXT: 10 Anime Characters Who Rely On Technology Too Much

Psychologist, gamer and writer at CBR and Nintendo Enthusiast. Has a love-hate relationship with technology and enjoys all things Japanese. Lives and breathes anime and strongly believes that Code Geass has the greatest ending of all anime. Follow him on Twitter at @ChiragPattni