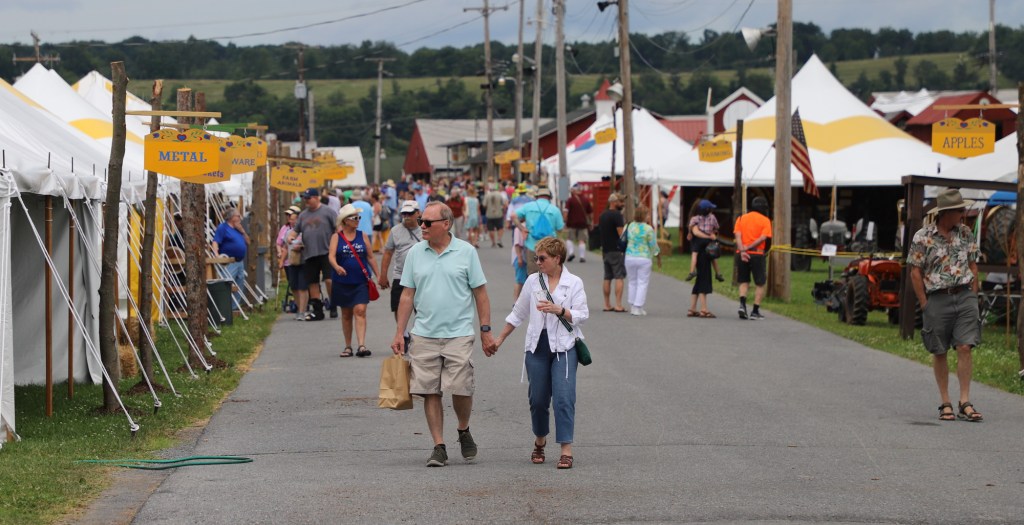 Sarah Edris is 22 years old, but she has attended every folk festival in Kutztown for the past 23 years.

The Mohrsville native joked that she attended her first folk festival when her mother was pregnant with her, and hasn’t missed one since.

“The folk festival has always been very meaningful to me, I identify strongly with Pennsylvania Dutch people,” Edris said.

Perched on a ladder above the dozens of stalls, and the slowly drifting crowd of thousands, Edris painted on a small barn.

The black-and-gold symbol she designed was new, but it stems from an age-old tradition, the barn stars, which have long graced Berks County barns.

The barn star Edris painted was just one of countless pieces of Pennsylvania Dutch history and culture on display at the Kutztown Fairgrounds on Saturday afternoon, as the 73rd Annual Folk Festival of Kutztown kicked off its opening day.

The ubiquitous melody of fiddlers playing upbeat tunes pairs perfectly with the smell of fried treats, sausages and roast beef drifting through the dozens of stalls and displays.

Decked out in traditional Pennsylvania Dutch attire, Amy Trumbauer kept the air fryer warm as funnel cakes flew off the counter into the hands of hungry attendees.

Stan and Michele Mascibroda of Pottstown enjoyed a new batch of funnel cakes while lounging on a haystack.

“They’re good. I used to do that a long time ago,” Stan Mascriboda said.

Michele Mascirboda said the highlight for her was craftsmanship, especially pottery.

In a nearby tent, master potter Steven Hunter offered handcrafted pots, bowls and cups adorned with chickens, faces and other unique designs.

He said red ware, or pottery made from clay rich in red shale, was commonly used by the Pennsylvania Dutch to store essentials like corn, molasses and whiskey.

Families gathered around a display of a Conestoga covered wagon, and in the heart of the fairgrounds, people filtered in and out of a small, one-room schoolhouse.

A few dozen children gathered around one of the many stages to watch the sheep being sheared.

The show’s star lay contentedly as Chris Stitzel carefully cut his woolen coat, first using electric shearing but switching to a hand tool at the end to show how farmers of the past sheared their flocks.

Stitzel’s father, Randy, said his family had run a wool shearing operation in Fleetwood since 1896.

She said her day was absolutely awesome and her favorite parts were seeing the animals and getting her face painted with butterfly wings.

Her father, Lawrence, said the family had recently moved to the Illinois area and this was their first time attending the festival.

“We did birch beer, sarsaparilla and stuff like that,” Lawrence Lloyd said. “The hex symbols were cool, just seeing all the different types of paint.”

“We look forward to seeing each other (at the festival every year),” Folk said. “It helps preserve the culture.”

Attractions are open daily from 9 a.m. to 6 p.m. until July 10. For more information, visit the Kutztown Folk Festival website, www.kutztownfestival.com.