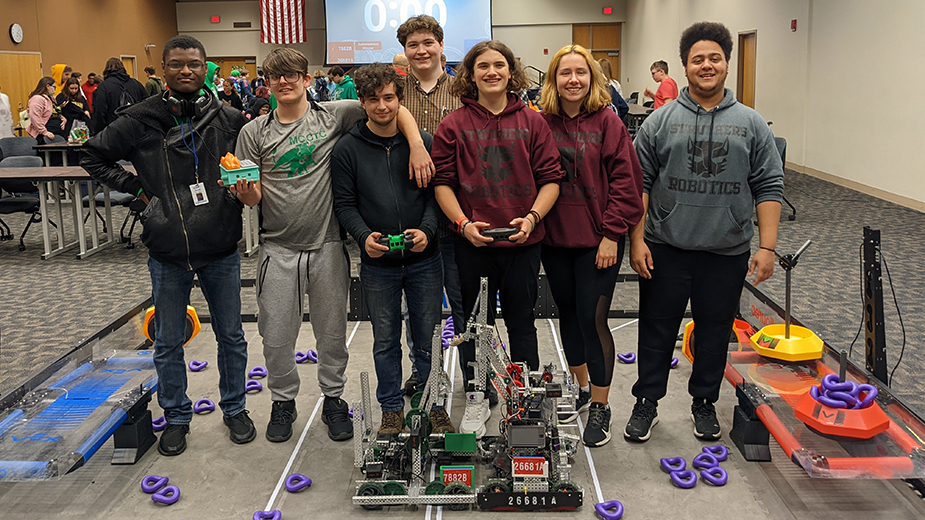 Teneva and her family moved to the United States from Bulgaria when she was in seventh grade. She found her place with robotics.

“I had no business here because I had no friends or passion,” says Teneva. “I found robotics and that was it.”

The Struthers robot has metal parts, gears, wheels and an electronic mechanism that makes the creation work. Students operated the robot to achieve goals in a 12-foot-by-12-foot arena during the competition held on February 17 at the Mahoning County Vocational and Technical Center.

Struthers beat 28 other Mahoning Valley schools to earn one of three spots at this year’s Ohio VEX Robotics High School State Championship on March 12 at the Marion County Fairgrounds and Veterans Memorial Coliseum.

MCCTC had two teams that also got placements. One of the teams joined with Team Struthers to secure victory in the competition.

After each team completes skill competitions and presents their robotics project orally, the top-ranked teams choose another group to form an alliance for the elimination round.

Robots are tested to ensure they have all the necessary equipment to participate in trials.

The teams perform their autonomous and controlled 15-second programs to accumulate as many points as possible during the two minutes of competition.

There is a blue zone and a red zone on either side of the arena where moving goals, or objects, are secured by the robot and placed on a wobbly platform that must be balanced. This coincides with this year’s VEX theme, Tipping Point.

Other goals can be placed by a robot in a team’s area to accumulate points as well, as well as putting plastic donuts on the mobile goals.

MCCTC senior Dominic DiMailo says the competition gives him a sense of accomplishment. His team has rebuilt his robot three times since the start of the school year.

Teneva says she enjoys adapting to different situations, much like the job of an engineer she aspires to become.

“There is never just one solution to a problem,” she says. “There are always several solutions. VEX is a great competition to teach you that.

Teneva and her Struthers teammates stay after school until 8 p.m. every night, tweaking their robots.

“Everything is worth it,” she says. “Once you love something, you want to give it your all.”

The nonprofit was founded in 1989, modeling athletics by applying engineering to a competitive event, which became robotics, Yantes explains.

“If you heard it from outside, you’d think there was a basketball game or something going on inside the gymnasium. But it’s a robotics competition,” he says.

VEX Robotics asks students to design, program, test and build a robot to perform a new task each year, says Baber. The idea of ​​competitions is for students to learn from their mistakes.

“The beauty of VEX for me, as an educator, is when we come back from that first competition. They can tear it up and start all over again,” says Baber. they have seen what is not working on their robot and they can get rid of it and add it to the ideas that work.

“Then they start the whole process all over again. It’s a constant cycle for them, which is the engineering design process.

Jim Pluchinsky, professor of science and robotics at Springfield Intermediate School, follows the The project paves the way curriculum, which builds bridges in STEM-related fields and provides teachers with the tools to engage their students.

There are 24 students involved in the VEX Robotics program with the encouragement of the Springfield teacher.

“Showing my enthusiasm for the program has been a big help in recruiting kids to join the robotics club,” says Pluchinsky.

These robots start out 18 inches tall, wide and deep and can grow to 36 inches once they’re in action, says Austintown Fitch High School senior Ryan Wilt. Students begin building the robots in August for competitions later in the school year.

“My best way to describe it is that they’re kind of like Legos except you’re using real nuts and bolts,” he says. “There are drilled holes and specific metal parts. You can cut and fold them and put them together. That’s how we make these robots.

VEX allows students to code their robots so that they can move around with controllers similar to those you would see used with video games or autonomously.

“We use a version of C++ [coding system] to communicate with the robot’s brain, which all the motors plug into,” says Wilt. “We can give this brain commands and tell it what to do based on certain inputs from our controllers.”

The first high school’s robotics program has 120-pound machines that perform feats such as traversing a five-foot bar and firing a nine-inch tennis ball into a goal eight-and-a-half feet in the air.

Unlike VEX robots, which have pre-packaged parts, First robots are built from aluminum parts welded together.

“We don’t have the right to pre-made parts that we can’t use next year,” Yantes says. “If we made it and physically made it, I can’t use it next year, so we start from scratch every year with this program.

Austintown Fitch STEM professor Robert Wyant said the school’s robotics club received a $20,000 grant at the end of last school year from Howmet Aerospace for a program that costs about $5,000 per year.

“It’s been greatly supported in the funding of this program because the price of the program fluctuates every year, depending on how many competitions there are, what parts they need, breaks and things like that,” he says.

The MCCTC program has approximately 45 students in its Grade 11 and 12 programs with a budget of $5,000 per year. There are six to eight students per team with competition entry fees ranging from $85 to $160 per team.

“We go to 12 competitions per year and per season. So these are 12 weekends that the students give up, ”explains Walter Baber, instructor in engineering and robotics at the school. “We travel up to three hours to compete in regional events to qualify for statehood.”

First operates K-12 robotics programs in the Austintown area, and approximately 100 students participate in the four programs. Its program is self-funded, relying on grants and fundraising with a budget of $36,000.

“I never want to leave a child behind just because there’s financial responsibility,” Yantes says.

Yantes recounts how one of his former students completes a summer internship at Bell Textron Inc. in Fort Worth, Texas. The Youngstown State University mechanical engineering student will work on the next generation of military helicopters while there.

Without the First program at Austintown, the student told Yantes, this opportunity would not have been possible, he says.

Austintown Fitch junior Carlos Candelaria is in the US Air Force Reserve Officer Training Corps and aspires to become an aircraft mechanic.

Learning robotics helped him focus on problem solving and critical thinking. This prompted him to do his homework instead of playing video games.

“For Springfield seventh-grader Ally Guerriero, this experience has opened up possibilities for her and more than half a dozen other girls in the robotics class.

“There are a ton of jobs I didn’t know I could do, like engineering,” she says. “I never would have thought of that if I hadn’t taken this course.”

Pictured above: Members of the top two teams in the February 17 robotics competition at the MCCTC are seniors Elion Oliver, Dominic DiMailo, Zac Pflug and junior Struthers Jacob Green, rookie Paul Armour, senior Ellie Teneva and senior Nate Slaven. They qualify for the departmental championship on March 12 in Marion.

How to pre-order – Billboard