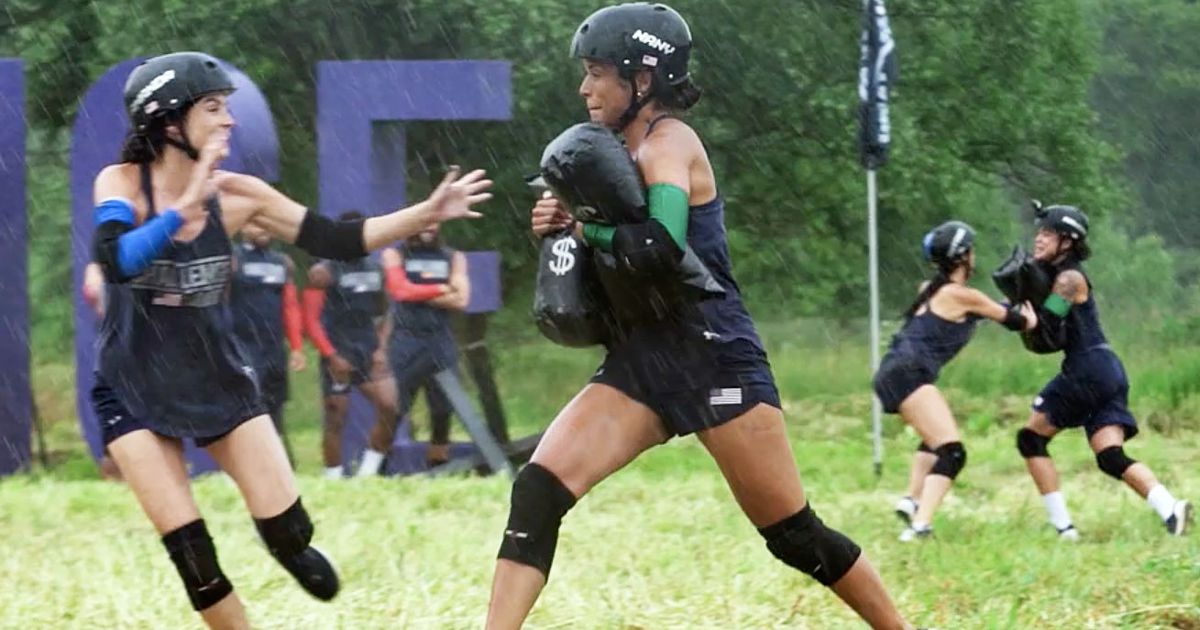 Last week’s preview teased another Emy meltdown followed by an apathetic CT reaction shot, which unfortunately turned out to be a shrewd cut. The producers are clearly aware of the whole ‘CT Manipulates Women’ trope that occurs almost every season and disrupts my Prince Charming fantasy towards it. While we didn’t have that explosive moment, it feels like we’re making some sort of break in their odd dad-daughter alliance / mentorship / bond.

CT wants Emy to join the Sapphire Cell, which he says needs more “strong girls.” He’s not entirely wrong and recognizes Ashley’s strength – which is sort of still an afterthought to people, even though she’s a two-time champion! However, I immediately cringe whenever the men on the show rate women’s athletic performance, as it is almost always incorrect, inconsistent, and generally basing their opinions on who is least likely to emasculate them. For example, Tori, who most of the time looks the role of a super athletic girl, is constantly mentioned by the guys, even if her record is lacking. And we have yet to see a specific area in which she excels. But she presents herself as a “girl who can hang herself” and does not argue with men. Kaycee too, with the exception of Josh. While women like Ashley and Amanda, who are outspoken and not afraid to call their male counterparts over their bullshit, rarely receive props for their respective abilities or are seen as coveted allies. Likewise, I’m going to infer that Emy has earned CT’s favor primarily by worshiping the ground he walks on instead of proving that she is a â€œstrongâ€ competitor for him. I am a real Sherlock!

Anyway, aside from CT leaving non-subtle hints to Emy that she should go for the next elimination for him – even if he would never do the same for her a week as a guy – this episode has the misfortune of being focused on Bettina, whose name I keep reading like Bettenon without my glasses. The scenes with Bettina are rough because she has as much character as the kitchen island that everyone sprawls on while eating their frozen pizzas after a night of drinking. We get this kind of episode every season when the contestants realize there’s a rookie that’s kind of gone under the radar, and they have to take her out of the game immediately. The producers didn’t usually pay much attention to them either, which means we viewers have to spend an hour and a half trying to care for someone with no story on the show and whose story has gone. maybe or maybe not briefly explained. at one point. So many rookie stories this season boil down to â€œI’m from such a country and I have parents,â€ so who can even remember that?

Now, let’s get into this week’s challenge. This episode marks The challenge500th episode, which doesn’t mean much to me, even as a longtime fan. But I think if you have an excuse to give it your all, spend more money, and make a challenge more special, you should take advantage of it. That being said, it’s odd that this segment kicks off with TJ announcing this milestone and then introducing a challenge that’s a shortened version of football and doesn’t incorporate any Challenge the story. The subtext here, of course, is that The challenge is currently so far removed from its original form – the All-Stars “spin-off” is ironically just an early version of the show – that you literally wouldn’t be able to make any anecdotes based on the show or rehash. iconic moments with the current cast because many of them haven’t witnessed the show’s glory years, in person or on television.

Likewise, we get a pretty entertaining game called “Brush Contact” involving cells transferring “bags of money” across terrain, alternating defense and attack. This challenge wasn’t as fierce as the producers might have liked, which is why I think they added smoke bombs and rain to make the game more intense. Honestly, I think it would have been more convincing if it had been played early in the season with more competition. In some scenarios, especially with men, you only had one person trying to block another, so there weren’t a lot of fights.

One highlight, however, was watching Josh slam Kyle to the ground with one hand. Kyle, as we saw in his brief, forgettable fight earlier with Nelson, became a little too comfortable calling people “bitches” and “pussies,” so it was nice to see the physical repercussions for him. those fighting words, even if they weren’t aimed at Josh. I also liked the women who burst out laughing every time they had to face each other. I’m sure some people would argue that women should have taken gambling as seriously as men, but I would argue that attacking an adult is inherently silly. There’s also a hilarious moment when Big T fights for his life on the pitch as Nany, Kaycee, and Tori attempt to steal the bags of money from him. For a second, they all look like hungry kittens fighting over their mom’s milk.

The Emerald Cell wins another victory, and a series of sleep-inducing conversations ensue. The politics of the last few episodes haven’t been very convincing, at least with Emerald Cell in power, as their only concern, for now, is staying together for the finale. I miss seeing competitors name people out of spite or because they might have said something about someone else. In addition to Emerald Cell using their power in predictable ways, we are once again in this cursed era of The challenge, following the skull twist, where producers created an incentive for people to embark on elimination, and rookies believe volunteering is a virtue. Recruits are not conditioned like older people to understand that volunteering for elimination is rarely worth the ideal outcome they think they will have when they come home. Likewise, Bettina asks to be the agency’s vote so she can choose who she wants to compete against, but it comes down to Emy.

There’s not much of a shock element to this storyline, but the producers always try to squeeze out some drama because they know Emy is easy to piss off. Apparently, there have been tensions between Emy and Bettina in recent weeks. Maybe they exchanged words in front of the camera. Maybe they didn’t. Who can remember anything involving Bettina? Either way, there’s no way anyone watching this really cares if these women are fighting each other, especially when one of them is probably on the verge. to go home. A castmate (who isn’t CT) tries to calm Emy down after she starts yelling at Bettina, who walks away from their conversation and apparently leaves the club. The editors realize that Emy’s explosion is so annoying that they cut the next morning amid her screams, “Why IS SHE TREATING ME DIFF-“

After some more repetitive chats around the house, we finally make it to the Den, where Emy announces in a surprisingly calm tone that she wants to compete with Bettina, which makes me more inclined to believe that an extra $ 50. was added to his paycheck for the end. the crisis of the night. Women play a game we have seen before involving a sharp object attached to a pendulum that strikes a set of targets. In light of this show’s recent obsession with imperialism, the pointed objects are missiles that must strike small circular targets in high beam.

This elimination basically boils down to who stayed awake during physics. While everyone assumed Bettina would be much weaker than Emy in a physical challenge, the only thing that seems to be in her way is that she doesn’t understand how momentum works. For my part, I would be deeply embarrassed if Cory, among everyone else, knew more than I did about a scientific concept and had to explain it in a confessional. But Bettina’s technique is so blatantly flawed that she needs to be pointed out by someone. Instead of allowing the missile to swing back and forth and gain distance that way, she continues to grab the rope too early and try to hit the missile only with the strength of her arms. It’s also interesting but not entirely surprising that Cory isn’t giving Bettina any advice on the sidelines despite her encouragement all season.

Emy ends up knocking down all six targets while Bettina hits none. In her awkward Emy way, she begins to roll in the sand screaming, “This is for Romania!” After saying goodbye to Bettina and her microbladed eyebrows, TJ presents Emy’s three options. For a millisecond, I think she’ll take over and join the winning team. But she is still under the spell of Uncle CT and runs towards Team Sapphire, moving Amanda to the Ruby cell. You can just tell by the concerted smile on CT’s face that while he enjoys having so much influence over someone, he’s slightly uncomfortable that Emy has added that family layer to their relationship. I haven’t seen this man call Emy his niece yet!

Hopefully next week the stakes will be higher and there will be some delicious backstabbing. I really regret that the more interesting and sneaky rookies left earlier in the game because now we’re mostly stuck with the lackluster set of veterans who made Double agents so painful to watch. If those dismal evaluations aren’t enough to alert the show to start recruiting from a wider range of vets, I don’t know what it is!

Watch all the drama from your favorite shows!


By submitting your email, you agree to our terms and Privacy Notice and to receive e-mail correspondence from us.