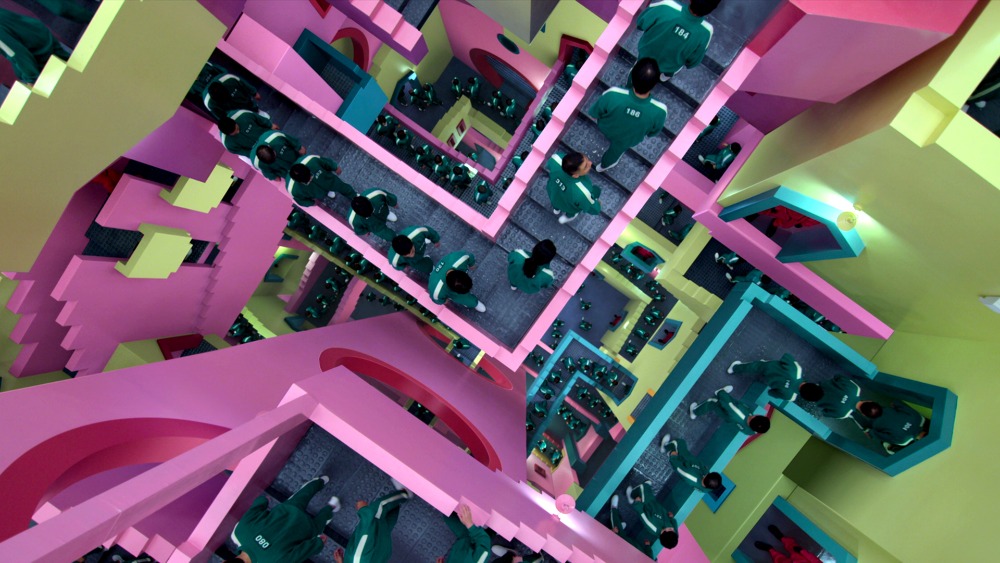 After ten years of creation, Netflix’s â€œSquid Gameâ€ quickly became a phenomenon even the streamer couldn’t predict. While the MC Escher-like staircase in the game’s Deadly Arena (pictured above) has already been the subject of much discussion, the creative process was far more complex. The physical sets were built on a large scale to accommodate the 456 participants in the story and everything else progressed from there.

Series production designer Chae Kyoung-sun shares some of the intricacies audiences may not have grasped, including Korean cultural references that contribute to the overwhelming tension and anxiety that resonates throughout a spectacle.

Which set do you think contributes the most to screen tension?

All spaces in the game world are built in sets. Art teams had to think like a designer who created the games. At the initial design stage, we envisioned how the world of Squid Game would play out on this remote island and organized the spaces accordingly.

The tug-of-war set was really built over 10 meters above the ground so some of the staff were quite afraid of heights. As for the glass stepping stone set, director Hwang and the directing department wanted it to be taller so the actors would have to jump really hard to move forward, but the depth had to be adjusted for the safety of the actors. I think the actors got scared and scared when they played this game. Of course their acting skills were also phenomenal.

The show has become a phenomenon and a lot has already been written about some of the more elaborate sets, like the Escher-inspired staircase and how much of a maze it really was for the cast and crew. What set didn’t get as much attention, but took a significant amount of work that audiences might not fully appreciate?

The large dormitory space is designed with the keywords â€œpeople left on the roadâ€. The raised platform in the middle is designed to resemble a tunnel entrance and the walls are covered with white tiles, which are commonly used in a tunnel. The beds are stacked against each other like goods in a warehouse, and they are removed as participants are eliminated. When chaos breaks out, these beds collapse and are destroyed to look like ladders or broken stairs, which signifies the desperate reality of not being able to climb.

The VIP room [in the final episodes] This is where I had to think through, and the design of this space was completed last. I looked through a wide array of images to form a concept. There are so many amazing places around the world, and I’m grateful to live in a time when good references can be easily found on the internet and in books.

The images I found were all very beautiful, so it took me a long time to conceptualize what the VIP room should look like. Finally, I decided to create the world of animals. VIPs are the kind of people who take other people’s lives for entertainment and treat them like playing pieces on a chess board, so I wanted to create a powerful and instinctive look for the room. Every animal mask these VIPs wear, and every accessory in their seating area, has hidden meanings.

The forest-like space was crafted by top scenic artist, and the Great Forest was created with the Greens team through essay and test series. As such, a lot of budget has been spent on this piece. I also had several meetings with the body painting artist to bring the design of the art team to life.

One question about this set of stairs, however – it almost looked like the sides of the staircase, and what would normally only be a railing, was lower than usual and touched in places just around the actors’ knees. . Did I imagine it or was it actually?

Certain works of art inspired me a lot when I was designing the spaces for “Squid Game”. I particularly remember two illustrations among many others.

One of them was an illustration of a child sitting next to a large wall. Next to the child, there is a ladder leaning against the wall, and the child makes a fire with wood taken from the ladder while looking at the wall. During the process, I wanted the art to help the show to deliver the questions it intends to ask and the themes it intends to put forward. Even when I’m making a single prop or deciding on a finishing material for a certain decor, I almost obsessively put intentions behind them so they can contribute to the larger themes.

The staircase that looks like the sides of the staircase also derives from the image of a ladder. The structural composition of a ladder and a staircase is widely used in the show. The labyrinth-shaped stairs are particularly well done and I am happy that they were well received.

There are elements of cultural overlap – the game Red Light Green Light, for example, which has counterparts in multiple cultures, and the giant piggy bank where money is collected for competitors. What are the design elements or details – and colors, numbers or other culturally significant references – that a South Korean audience may recognize but an international audience may miss?

Some of the design elements may seem unfamiliar to international audiences as they come from Korean textbooks from the 70s and 80s. The main colors in the show – mint green and pink – also come from colors often used in children’s school supplies at the time. , so they were very effective in evoking the childhood nostalgia of Korean viewers. Participants wear a green tracksuit, which is the most common color for school tracksuit in Korea, while masked staff wear a pink jumpsuit. This color contrast also carries a double meaning to represent the brutal world.

Color plays an important role: dizzying shades are used everywhere. How did you, the director and the costume designer, work together to balance all the hues and define a functional color palette for the show?

Director Hwang first decided on the costume’s pink color. It was a great decision and a perfect start to a fun trip. The color contrast between pink and green was used to represent the status of the characters and their belonging. It extends beyond the colors of the costume to the colors of space. The labyrinth staircase that the participants have to cross is mainly pink in color. Naturally, for the participants in green, the color pink becomes a symbol of danger, fear and terror.

The waiting area is colored white to express the feeling of extreme fear that participants experience when placed in the midst of the most complete stranger. The color shows that this space is where participants are forced to wait without knowing what the next game is and what awaits them.

Could you walk me through some of the design inspirations between the sets for each of the games?

I wanted to fill the whole of the first game with fantastic, fairy-tale imagery. The robot doll was designed after one of the duets from the 80s textbook “Chul-soo and Young-hee” and a menacing tree was placed as the object. This juxtaposition evokes both childhood memories and the feeling of fear. The walls are decorated with reed fields and clear skies, like one would see in a storybook. But the fields and clouds aren’t real, and once the game is over, the ceiling closes over the confused faces of the survivors and the dead.

Participants are invited to take on the honeycomb challenge like children of the 70s and 80s who gathered in small groups in the playground to play the game. They had to play the honeycomb game being as a child, they are therefore invited to immerse themselves in old childhood memories. In the past, the playground was where they played with friends and had fun, but now it’s become a space for a deadly game. I’m sure everyone has the experience of looking at the playground as an adult and thinking that the playground equipment looks so much smaller than what it looked like as a kid. This experience of changes of scale is a determining element in the scenography of the second game.

The objects of the playground such as the slide, the swing and the merry-go-rounds are multiplied by three. And the walls are decorated with pencil drawings of clouds to add childish, fairytale touches.

The third game: Tug of War

The main concept of this design is â€œpeople left on the roadâ€. The same design concept goes into the large dormitory in the form of an arched tunnel entrance. As for the decor of this game, the concept is realized in the form of a road. The road-shaped play ring sits atop the 30-meter steel structure to engage the desperation participants feel when they get lost and get thrown onto the road, and to maximize the dramatic impact of their fall to the asphalt ground. The physical set was made to the maximum height necessary for filming, and the scenes were completed with the work of the computer graphics team.

This game is built on the theme of “Gganbu”. Gganbu means close and trusted friends, and you can make Gganbu friends by making a finger promise. The whole of the fourth game is designed to tell the story of memories of one of the participants. The small pieces of memories are brought in form to different sides of the alleys, each one being like the scene of a play. The key to this design is to create a feeling of depth by layering flat surfaces. Objects such as the design of the common roof or the design of the doors of old multi-family houses were used as flat surface elements.

Unlike other games, the glass stepping stone game is watched by the public. Participants must cross the dangerous glass bridge as if they were walking along a rope. It is as if they were in a circus to put on a glamorous air show in front of the spectators. This is why this set is designed for a circus scene. The bridge is located in the middle of a huge tent surrounded by layers of curtains. The color scheme includes the vivid greens and purples of the ’70s and’ 80s, and the brightly colored lighting that is commonly used in the amusement park adds to the splendor.

(Details for Game 6 have been withheld due to spoilers.)