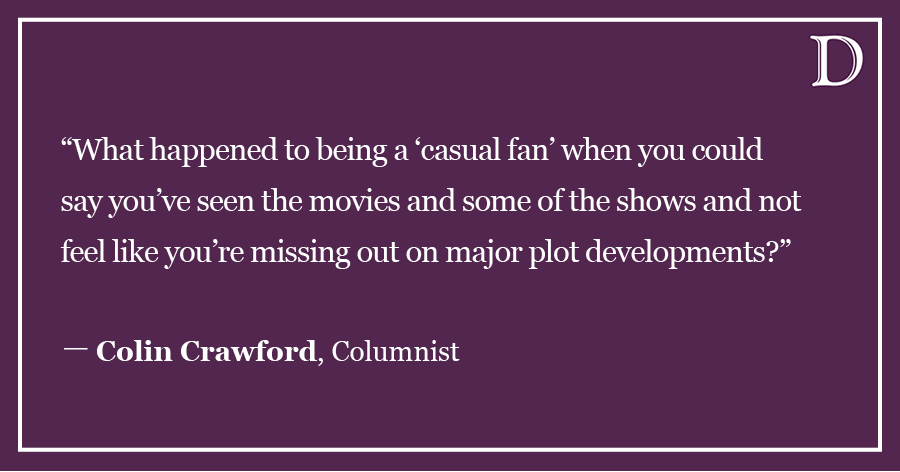 Tomorrow is May 4. A seemingly innocuous date on the calendar that has no real meaning to the average person, but for a Star Wars fan it’s a highlight of the year and Disney wasted no time promoting the great day. The Star Wars website and the Star Wars section of Disney+ already had banners celebrating “Star Wars Day” the day before.

A Star Wars fan myself, I usually repost something from his official Instagram account. One year I wore designer socks to school. This year, however, I’m more tired than anything. Exhausted from the onslaught of content from a company that masters corporate hegemony, I find myself unable to keep up with the franchise.

After its launch in 2019, Disney+ has merged all Star Wars content, bringing it to one platform. While it’s easier to consume all of this content, the platform is overwhelming. Spin-off movies, cartoons, and new original series overload my brain. Even listing it all gives me a headache.

What happened to being a “casual fan” when you could say you’ve seen the movies and some shows and didn’t feel like you missed any major plot developments? The intense marketing of new shows like “The Mandalorian” and “The Book of Boba Fett” makes them appealing, but watching would also mean significant investments of my time.

Perhaps this feeling can be best explained by cognitive dissonance. I consider myself a Star Wars fan, so when I see new shows I haven’t watched, my brain flags it as an inconsistency and forces me to reconsider how much I really enjoy the franchise.

Disney hasn’t been subtle in its marketing and commodification of the franchise that is loved by so many. This double-edged sword means fans get more content and interactive experience than ever before. At the same time, Disney benefits from the consumer culture it helps to perpetuate, and fans may be buried by this deluge of branded material.

This is perhaps most evident in the new four-digit immersive two-night Star Wars: Galactic Starcruiser experience, a place to stay for guests at Disney World in Orlando. For $6,550, vacationers can live aboard a spaceship designed as if it were part of the Star Wars universe. Complete with mission-based activities and themed fare, like blue milk, the hotel is a Star Wars fan’s ultimate destination.

The price itself is objectionable. Why should one pay so much for a two-day trip? Disney creates barriers to being part of the fandom because exclusivity allows it to charge higher prices. But for a franchise that has immense global reach, this tiered experience is really only for the select few who can afford it.

Star Wars fatigue is real, and I’m living it. At first it was cool: an original idea to build on a world that already existed and had fans. Watching “The Mandalorian” was great fun, but after the second season I started to wonder if Disney was really trying to provide fan service or serve themselves. And it has become clear that the latter is more true.

And they’re just getting started. Disney has a slate of Star Wars content ready to be served up to the masses: “Obi-Wan Kenobi,” the limited series following a central character in fandom lore will arrive on Disney+ in a few weeks.

So say “Ahhh” and open up: Disney has another bite of Star Wars content to choke you up on. Something to corrode, not cleanse, your palate.

May the fourth be with you.