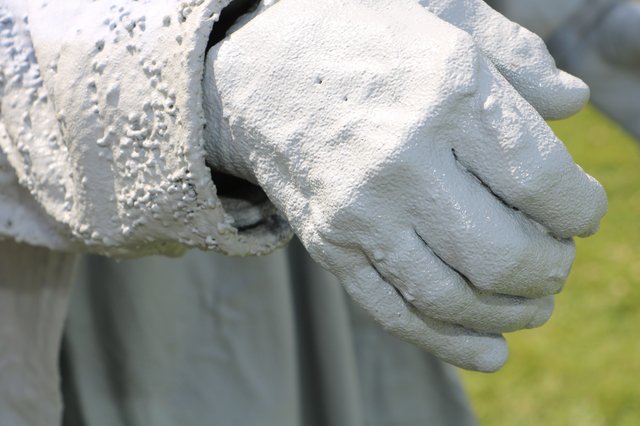 Today’s Not Forgotten event through Monday at Woodward Park includes a memorial to those who served in the Korean War.

Instead of just strolling past the replicas of the soldier statues that form the Korean War Memorial in Washington, DC, take a minute and examine them in depth. Everyone tells a story from a paratrooper to a medic who served in a bloody war that most have long forgotten or – more accurately in many cases – know nothing about.

Take a look at the hands.

These are the hands that helped protect our freedoms.

These are the hands that carried the guns into battle.

These are the hands that pulled an injured buddy to safety.

These are the hands that cradled those who died on battlefields 5,600 miles away.

The hands come from molds of real American soldiers – now in the 80s and 90s – who served in a war that claimed the lives of 54,246 Americans.

Jeannie Ignash – the daughter of Army Staff Sgt. John Ignash, who served America for more than 34 years and fought in the Korean and Vietnam Wars, sought out the men who served for the replica she created of the Korean War Memorial.

Ignash wanted their hands – the hands that guaranteed the freedoms we too often take for granted – to attach to the life-size miniatures of the soldiers.

She carefully created molds of the hands of those who served in the bloody conflict that many who see the memorial say they were never aware of.

These are the hands that Ignash hopes people will connect with.

It took – and it takes – real humans – to guarantee and preserve freedoms.

In the annals of civilization, freedoms of speech, worship, public assembly, and even property are but a flicker of a candle in the wind tunnel of history. They are rare through the ages and increasingly rare to enjoy at the concentrated level we take for granted today.

The war in which these hands served in the 1950s seems light years ago.

Ignash’s father has always made a point of correcting those who say “freedom is not free”.

He would remind them that it is not true.

It was the soldiers who paid the price. Some died on the battlefield. Some suffered serious injuries. And others, who may not have been in a war zone or served in relatively difficult times, have given years of service.

These are the 15 people who died in Kabul following a terrorist attack while helping evacuees out of Afghanistan last summer while we were in the comfort of our air-conditioned homes.

They are among those represented by the 7,000 white crosses in Woodward Park that fell in the global war on terror after the September 11, 2011 attack on America.

They are also among the crowd at Woodward Park. Veterans – and active duty military – who have and who serve.

Shake hands with these men and women.

Feel the touch of the hands that secured wealth greater than all the gold and bitcoin in the world – freedom.