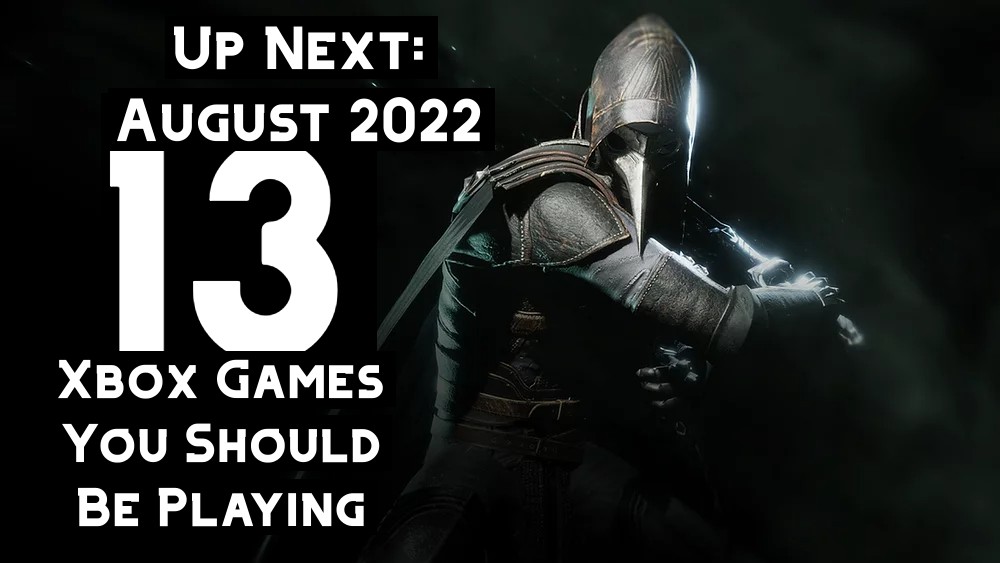 August must be good if we have to fit in thirteen new Xbox games in our Up Next. Yes, rather than tweaking Up Next by removing some of the fabulous games coming in August, we’ve decided to include every single Xbox game we’ve been excited about. And there’s plenty to be excited about.

There are the big guns in the form of Saints Row and Madden NFL 23, the medium guns of Two Point Campus and F1 Manager 22, and the small guns we secretly want to tinker with before the bigger guns, like Thymesia and South of the Circle. So buckle up, because this thirteen is far from unlucky.

Team17 has the flair for a good game. When you see their logo slapped on a box, you can be sure it will at least be imaginative and worth your while. And it is this quality label that makes thymesia enticing. Normally a Dark Souls-a-like would make us groan a bit, but now it’s catching our attention.

Thymesia is an action-RPG where you play as a plague-bringer called Corvus, as you wander a disease-ridden world called Hermes in search of alchemical materials that might help you fight off the plague. You have to defeat towering, pustular beasts to claim plague weapons, as well as unlock new combat abilities, and it all sounds pretty punishing and fun.

If you’ve got a little love for PC Classic Theme Hospital, or fancy a good sim strategy on Xbox, then you’ve probably played Two Points Hospital. Two Point Studios’ 2018 hit did the trick, with a number of DLC add-ons bolstering its appeal.

Two Point Studios has since researched the next topic for its crazy strategy model. And they found it in the drinks, the drugs, and the college simulation lectures. Two-point campus places you as the Don of a new university, and it’s up to you to construct the buildings, hire the teachers, and construct a wildly imaginative subject curriculum that gives your students top grades and makes them employable. You can even create your own Hogwarts.

If the name Tribes of Midgard rings a bell, then you may have been spending time around a PC player. A decent hit with master racers, Tribes of Midgard has been quietly building a community around its co-op play, season structure, and hack-and-slash loot since the middle of 2021.

Now it’s Xbox’s turn to see what it’s all about. The structure is relatively simple: protect your base and its sacred tree from fierce opponents, then head to Midgard with your cooperative allies to plunder resources, defeat enemies and strengthen your base. It’s got a roguelite feel to it, with a hint of survival in it too, and that should be a good old fit for the Xbox.

Path of the hunter

If you’ve ever harbored the fantasy of running away to a remote place, building a log cabin, and living off the land, then may we introduce you to Path of the hunter. fans of theHunter: The Call of the Wild absolutely must take note: Way of the Hunter strays into the same territory.

Brought to you by THQ Nordic, this grabs our interest by being a co-op survival sim. You and a friend can choose from a range of modern weaponry to head out into the wilderness to hunt down and kill game. There are two vast territories of 55 miles each – one in the United States and another in Europe – which should be more than enough to find a bush and deal with a call of the wild.

You already know if this is your brand of corndog. Madden NFL returns this year with the 2023 iteration, and the late John Madden is squealing from the cover.

There are plenty of reasons to choose Madden NFL 23 like your return to American football on console. There is an inflated face of the franchise, where you can choose to play in any position you want, navigating a one-year “prove it” contract before starting your actual career. Then there’s Franchise Mode, where you go from player to manager, scouting players, running practices, and building a playbook to hit play-offs.

And, of course, there’s the cash cow: Madden Ultimate Team. Close your wallets.

But that doesn’t stop the new Saints Row from being one hell of a punt. There’s a large audience that loves the crazy open worlds and kitchen sinks of previous games, and – one way or another – that needs to be regained. Early signs look good though: previews have come back positive, and the character creation editor has been in people’s hands for a while, and it’s just as comprehensive as you’d hope. Maybe this one will work after all.

There’s no one we’d rather do F1 Manager 22 than Frontier Developments. The undisputed masters of management sim, having tackled dinosaurs and roller coasters in Jurassic world evolution and Planet Coasterthey are now turning their attention to the world of Formula 1.

We are used to driving F1 cars thanks to Codemasters Long Series, but this game “pits” you against the head of the builder. Choose from a list of official 2022 drivers and teams and build everything you need to win the 2022 season: the car, the factory and the strategy.

This one promises to give you control over every little function of a constructor, and it will be music to the ears of F1 enthusiasts.

Someday an ATLUS RPG will focus on something mundane, without doomsday forces and crazy plots involving demons, but Soul Hackers 2 is not that RPG.

The story centers on an AI called Aion who evolved sentience and in doing so saw the end of the world. He believes that a series of events will lead to demons causing the apocalypse, and he has determined that the only method to hold back said armageddon is to create Ringo and Fig, two soul-hacking agents who subdue the demons themselves. same. Thus begins a lyrical saga that will swallow up hundreds of hours of your life, as is the case with all ATLUS games.

If you love your childish and explosive action platformers, then may we introduce Destroy all humans! 2: Reproved. A complete remaster of the PS2 and Xbox (minor) classic, it once again puts you in control of Crypto, the alien menace, and sets you free on Earth.

In revenge on the KGB for shooting down your ship, this time around you team up with human allies, rather than just mixing them together to make DNA cocktails. It’s all about big guns, like meteor showers, as you play alone or with a co-op partner, jetpacking and laying waste to entire neighborhoods.

There’s nothing neat here. Everything is the lowest of monobrows.

oddly enough, Arcade paradise is only the second game this year where we have the opportunity to own an arcade-integrated laundromat. Arcade Spirits: the new challengers pulled the same trick, but Arcade Paradise is a very different game.

During the day, do chores in the laundromat, remove gum from countertops, unclog machines and, most importantly, collect parts. Then, in the evening, spend your coins on arcade machines, upgrade them, and then try them out yourself. You won’t recognize any of the games – they’re homages to the originals – but the real fun comes from beating your bettors’ high scores and mastering the games yourself.

There’s room on the Xbox for a Pikmin clone. There are certainly room for a passionate game of Pikmin that looks as lavish and colorful as Tinykinwhich transposes the zoomed-in approach of Nintendo’s classic into a zoomed-out 3D platformer.

There’s a fascinating premise here too. You play as Milo, who arrives on Earth, only to find that they are smaller than the humans living there. But more curiously, there are no real humans around, and a day hasn’t passed since 1991. Something is clearly wrong, and you and your ragtag band of little aliens are about to find out what happened. caused all of this. Being an alien, Milo has a different way of doing things: in this case, throwing aliens at household objects. Anything that does the job.

South of the circle

After doing business on Apple Arcade, South of the Circle is coming to Xbox. This walking simulator/narrative adventure is a two-part story. The first half finds you cruising through Antarctica, having crash-landed to find that everyone seems to have abandoned their various outposts. The second half looks back at the events leading up to the expedition, as the main character, Peter, tries to find the courage to finish his cloud climatology paper.

Although there may not be much gameplay, and – according to our South of the Circle review – dialogue options are presented in a bizarrely convoluted way, it’s a spectacularly told story with some of the best voice acting we’ve come across.

Just grab a pinch of whiskey before you go, because you’ll need to warm up.

Video gaming has taken golf to a number of unusual places. It was an RPG in RPGolf Legends, a board game in Party Golf and a narrative adventure in Golf Story. Cursed to Golf pushes that envelope even further, turning golf into an action platformer.

Play as the cursed golfer, destined to remain forever in golf purgatory unless he can place first in a golf tournament. You are as damned as the golfers of LIV. With your undead caddy in tow, you’ll navigate 2D platforming environments and take on enemies with a well-placed pitching wedge to the noggin.

I hope you understand why we’ve extended the Up Next to thirteen: there’s a whole buffet of options in August.

September, of course, is when silly season begins, and we’re as blessed with the games as you might expect. There are JoJo’s Bizarre Adventure: All Star Battle Rlego brawls, Biomutant (X|S series version/free update), Warhammer 40,000: Darktide and Based (full game) to name a few. We look forward to introducing September goods in a month.

Are there interest-free student loans?