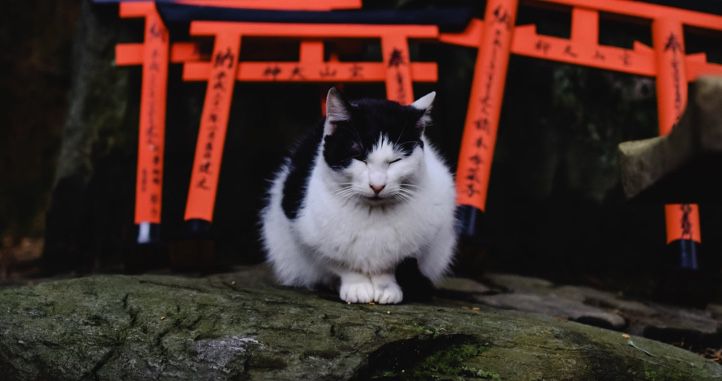 What does the image of the cat mean in Japanese fiction?

This content contains affiliate links. When you purchase through these links, we may earn an affiliate commission.

In Japanese folklore, cats are symbols of luck and have protective powers. Take the story of maneki-neko for example. Centuries ago, a feudal lord, standing under a tree, saw a cat beckoning him. Curious, he walked over to the cat and just then lightning struck the tree. Thus was born the story of the maneki-neko and even now we see Asian shops and restaurants have figurines of this auspicious cat in hopes that it will bless the owner and customers. Since then, the image of the cat in Japanese fiction has evolved. Now they are not just a background prop but have stories centered around them.

Hiro Arikawa The Traveling Cat Chronicles (translated by Philip Gabriel), features a cat traveling with its owner in a silver van. This book talks about the bond that exists between humans and cats and, in turn, the correlation of humanity with nature and animals. Satoru adopts a stray cat, names it Nana, and they set off across Japan to meet people, some of whom are from Satoru’s past. Nana doesn’t know until the end why Satoru went on a long road trip and took him with him. From what we know, Satoru feels he won’t be able to take care of Nana for long, so he has to find her another home. He visits the houses of his friends he hasn’t seen for a long time and also his aunt, Noriko. As Nana and Satoru travel through Japan, readers gain insight into who they are, their pasts, and their relationships with other humans and animals. Through Nana, readers learn about the compassionate nature of not only Satoru, but other characters as well. Satoru’s friends are affectionate towards Nana, and Noriko’s initial reluctance about cats dissolves into a love so intense that she even harbors an abandoned cat. Nana brings out simple traits like friendship and loyalty and signifies how much love all living beings are capable of giving. Cats in Japanese fiction often reflect the compassionate side of the human heart. In a world destroyed by wars and pandemics, this fictional vision of cats rekindles our faith in humanity and the kindness it still has to offer. The spectacle of mass consumerism that is often presented to us as beauty falls short of the beauty of humanity’s relationship with the natural world. This cat story is a call to each of us to take stock of the animal world that coexists with ours and thus unite with it.

At Takashi Hiraide’s The guest cat, translated by Eric Selland, the cat becomes an agent of hope. A cat starts frequenting a married couple’s house in a quiet Tokyo neighborhood. Their marriage has become very predictable and they don’t have much to say to each other. Their relationship has become a billboard for monotony. The cat brings novelty and anticipation to their lives. Soon they find happiness in the cat’s many antics and have a lot to share with each other. As their love for this mysterious guest grows, the strings of their marriage tighten. In this novel, the cat becomes a recipe for renewal, a wonderful miracle showing how love is never truly lost and always awaits us in every nook and cranny. Even if it doesn’t always seem like it, the couple still have a lot of love in them. The cat symbolizes the outlet by which this fact is highlighted. Life in all its banality and even its ugly vulgarity imposes itself on this couple right down to the cat. The chat becomes a path by which the monastic silence is broken and the oppressive weight of banality is overcome. Even if it is a distanced intimacy, sincere but without permanence, the cat and the couple nevertheless share a kind of intimacy.

At Nick Bradley’s The cat and the city, the cat becomes an emblem of the city and its many mysteries. In this collection of short stories, each story is independent but also has a link with the other stories. The city here is a complex machine driven by fate, and fate is a trickster with a sense of humor that often borders on cruelty. 18-year-old Naomi is seen asking tattoo artist Kentaro for a Tokyo city tattoo on her back. She makes it clear that she doesn’t want anyone, so Kentaro mischievously draws a cat thinking that cats aren’t people. Much to Kentaro’s surprise, the cat’s position keeps changing. Just like its real-life counterparts, the cat in the tattoo has been blessed with unbridled freedom and it can roam as it sees fit. As the book progresses, many questions arise. Is Kentaro responsible for some way of bringing the cat to life? Is Naomi able to change shape and become the cat from time to time? Is the cat a metaphor for the Tokyo subway line that seems to connect all places? Regardless of all the mysteries that remain ambiguous until the end, the cat, and by extension the city, has established itself as the common bond that we see between all the characters. It represents how humans are all related in some way. No matter how much we fight with each other, our basic needs are the same. The cat witnesses the despair, loneliness and failures of the characters. The ugliness of everyday life sometimes becomes too much to bear and the cat is its representative. It becomes the spirit of the city, something that brings people together or drives them apart, the common denominator through which they express themselves.

Sign up for our Book Deals newsletter and get up to 80% off the books you really want to read.

Thank you for signing up! Keep an eye on your inbox.

By signing up, you agree to our terms of use

In Japanese fiction, the image of the cat has many connotations. But what stands out is its ability to reflect certain aspects of humanity. It brings us face to face with what is hidden within us. It also helps us gauge how meaningfully we are engaging with the world around us. If you want to read more books about cats, please check out this list of some of the best-known cats in the book world.

Loans for bad credit with guaranteed approval online: the best way to get fast money